Book Review of A Gentleman in Moscow

23 Jun Book Review of A Gentleman in Moscow

This post was published on: 06/23/18 in the Book Reviews, Books category 0 Comments

I’ve finally written this historical fiction book review on A Gentleman in Moscow by Amor Towles. I listened to all four hundred sixty-eight pages of it on Audible Audeo, and with the limited amount of driving time I put in these days, it seems like It’s taken me forever to finish it. Plus, I only listen to it when I’m in the car. Excuses aside, it’s an intriguing book, which I’d recommend it to anyone interested in character-driven historical novels. 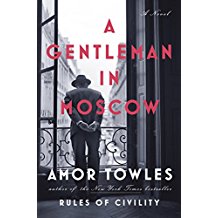 The story begins in 1922, when a Bolshevik tribunal sentences Count Alexander Ilyich Rostov to house arrest. Confined to the Metropol, a luxury hotel across from the Kremlin, Rostov escapes the fate of his fellow aristocrats. However, he risks getting shot if he ever leaves the hotel.

From his shrunken world as a “Former Person,” the Count passes the next three decades. His goal is to live a full and rich life. His guiding principle: “If one does not master his circumstances, one is bound to be mastered by them.”

The Count operates out of a tiny room on the top floor of the hotel. Allowed only a few of his pieces of fine furniture and a set of porcelain plates, he maintains the gracious lifestyle of a gentleman. He dresses and takes his morning coffee in his room. Afterwards, he descends the stairs to greet and interact with the hotel staff and guests.

The Count is a Lovable Character

Early on in the book, the reader identifies with the Count as a lovable character. He is resourceful, full of charm, wit, and humor. The Count engages with an array of colorful characters as he dines in the upscale Boyarsky restaurant and frequents the Shalyapin bar in the evenings.

His impeccable manners and knowledge of serving gets him a job as head waiter of the Boyarsky. There, he forms a bond of friendship with the cook and maître d’, as well as Marina, the hotel seamstress, who teaches him to sew.

The Communists re-commission the hotel to house bureaucrats and foreign guests. The Count befriends Nina, the precocious daughter of a Bolshevik official quartering his family in a luxury suite there. Together, they use Nina’s skeleton key to explore the back rooms and passageways of the Metropol.

When her father leaves Moscow for another post, Nina gives the key to the Count as a parting gift. The key liberates the Count to go wherever he pleases in the massive hotel, night or day. It opens up his world and frees him from his claustrophobic existence.

During the Stalinist purges, Nina bestows another gift on the Count. She leaves him with her daughter, Sofia, when she goes to find her exiled husband who’s been arrested and sent to do hard labor in Sevvostlag. Nina never returns, and the Count makes room for Sophia in his cramped quarters.  Thus, he raises her with the help of his hotel “family”—Anna, the actress and paramour; Emile, head chef at the Boyarsky; Andrey, the Maitre d’; and, Marina, the hotel seamstress.

The Story is not Primarily About Historical Events, but About Relationships

The author gives the reader a glimpse into the way political realities in Soviet Russia shape the lives of the characters.  “Mishka,” an old friend from university days, converses with the Count about his struggle against censorship. He argues that as a people, “We Russians have proven unusually adept at destroying that which we have created.” But the story is not primarily about the historical events going on in the outside world. Rather, it’s about relationships, friendships, and the control of ones circumstances within the world of the Metropol.

Ending is Both Realistic and Satisfying

The Count is familiar with the tendency of the Soviet bureaucracy to destroy the dreams of its young women. When Sofia develops into a talented musician and receives an invitation to participate in a goodwill concert in Paris, the Count devises an intricate plan that will allow her to pursue her dreams. The book’s ending is both realistic and satisfying. It reveals the Count’s deep love for his adopted Metropol family, and his loyalty to his country, Russia, even after thirty years of confinement.

Sorry, the comment form is closed at this time.