This post was published on: 10/19/18 in the Writing category 0 Comments

I’ve been really stuck prepping for National Novel Writing Month. That is, until I found the resources that I’m about to share with you below.

The historical novel for which I’ll be writing a 50,000 word draft between November 1 and 30, is called Rising Above it. It’s the fourth one in my Barton Family Series. The plot boils down to one question.  That is, Can Hattie Barton rise above her personal and financial loss brought on by the stock market crash of 1929?

I pretty much developed the main characters while writing the first three novels. But the story line was giving me fits. I needed an organizational tool to help pull things together. As I characteristically do when in the planning stage of a novel, I searched the web for a magic solution.

Creative Penn to the Rescue

Joanna Penn offers multiple resources for indie writers. You can always count on her to address almost any issue related to indie writing and publishing. Often, she blogs from her own experience. However, she also pulls in experts on various topics, like the video below.

After watching the video, I purchased and read Libbie Hawker’s book, Take Off Your Pants: Outline Your Books for Faster, Better Writing

With the guidance of the book, I began outlining my novel and was able to complete the bare bones of it. However, I became interested in Hawker’s comments about her mentor, John Truby, from whom she learned her outlining techniques.

I purchased Truby’s Anatomy of a Story: 22 Steps to Becoming a Master Storyteller.  After reading and working through the exercises in Truby’s book, my planning really took off. In less than a week, I completed a full outline of my novel, right down to the chapter and scene levels. 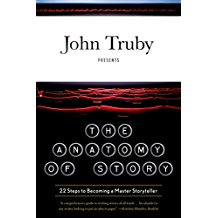 I haven’t written a word of the novel itself. But I now have a proper road map that will guide me through the composing stage from beginning to end.

Imagine what a relief it is to have the bulk of the planning for Rising Above it finished. Now I can relax a bit and focus on my responsibilities as Co-Municipal Liaison for the Winston Salem region. Check out our calendar and regional forums at http://bit.ly/2q3d8ba.

If you’re a fellow WriMo, I highly recommend these resources. They aren’t magic. They do require intensive time and effort. But considering the results I got, they’re the next thing to it!