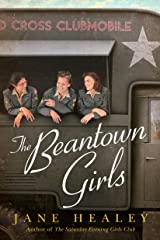 Reading and writing stories about ordinary women who do extraordinary things is a favorite past time of mine, and the World War II era is rife with fiction in this area. I especially like fiction based on little-known events wrapped around a good story.  Beantown Girls by Jane Healy is just that kind of novel.

This is an engaging story about Fiona Denning and her two best friends from Boston, who join up as Red Cross “Clubmobile girls,” serving on the front lines of World War II by providing soldiers with coffee, doughnuts, and emotional support.

When the women depart from New York Harbor on the Queen Elizabeth in July of 1944, for their first assignment in England, they are transported into the final harrowing months of the war in Europe. There, they witness extraordinary acts of bravery and sacrifice, which inspire them to risk their own lives and comfort on behalf of the troops.

Pushed to their limits, they learn to rely on one another as they form bonds of friendship and discover courage they did not know they had.

Though I have read extensively on World War II, this is the first time I had heard of the Red Cross clubmobiles. I was surprised to learn that the Red Cross, the only civilian service organization approved by the War Department to work with overseas military personal, established a presence in virtually every part of the world in which US forces were stationed.

They provided relief supplies for civilian victims of conflict, blood donor service, and volunteer aid to the sick and wounded. They also kept a record of all soldiers killed or missing in action and worked with families to provide information on the whereabouts of their loved ones as well as support of their physical and emotional needs.

The addition of the clubmobiles was an effort to bring a taste of home to the troops, even those on the front line. Clubmobile girls drove their trucks to the surrounding camps and airfields in France. They served coffee and homemade donuts, gave out cigarettes and gum, and provided music and conversation to the soldiers returning from bombing missions and front line fighting.