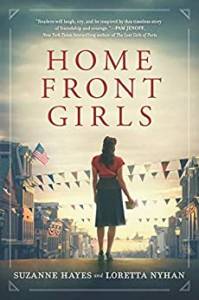 Homefront Girls is the story of two American women brought together by a twist of fate, told entirely through their exchange of letters between January 1943 and July 1946.

Gloria is a bright and energetic young mother from New England; Rita is a Midwestern professor’s wife with a generous heart and love for gardening. The two have little in common except for one bond: the men they love are fighting in a war that is a world away from home.

Their correspondence is a lifeline that enables the women to survive the loneliness and uncertainty of waiting on the home front, as well as dealing with the challenges they face in their own homes and communities.

The story is a testament to the strength and solidarity of women and a reminder of the importance of friendship to carry us through times of greatest difficulty.

One of my favorite parts of the letters were the recipes that the women traded for making meals with their rationed food.

Beer Bread (So simple and good.)

Mix one bottle of beer, three cups of self-rising flour and 1/2 cup of corn syrup. Bake at 375 degrees for 45 minutes.

Cook and cool the following:

Place crackers in the unbaked pie shell. Pour the cooled mixture over the crackers. Cover with the second layer of pie crust.

Bake at 325 degrees. (One would never know there were no apples in it.)

Melt cheese and butter over hot water, slowly. When about 1/4 of the cheese has melted, add half the beer slowly. Continue to cook until cheese is all melted, stirring constantly. Stir in remaining beer into egg yolks; add slowly to cheese mixture. Stir constantly until thick and smooth. Serve immediately on toast or crackers, garnished with paprika.