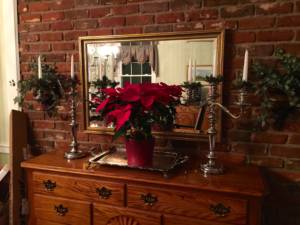 Every Christmas season, I polish up my mother’s silver candelabra and set them out in the dining room. Given our informal lifestyle and my aversion to polishing silver, they’re a bit too ornate to have out all year. But I do like to display them for the holidays. Every time I open the box to bring them out, I remember the story of how they came into our family.

It was 1952. My mother, my father, my sister Betsy, and I, lived in Charlotte, North Carolina, where my father was the minister of education at Myers Park Baptist Church. In terms of material possessions, we certainly had everything we needed, but on a minister’s salary of around $4000 a year, there was never much to spare.

That’s probably why we were one of the last families on our block to get a television.

My sister and I begged for a set of our own, but my dad said we couldn’t justify the expense and needed to wait until the price came down some. And so, we would go next door to Carol’s house to watch the Howdy Doody Show every day. The three of us, along with our friend Nancy, and Carol’s dog Topsy, would line up on the sofa, mesmerized by the antics of Buffalo Bob, Clarabell the clown, Mr. Bluster, and Princess Summerfall Winterspring.

Topsy, the Hart’s brown and black wire-haired terrier, would sit, shivering with excitement, until the sound of Clarabell’s horn caused him to leap to the floor, bark frantically, and run several circles around the room before he would return to his place on the couch.

One morning, several weeks before Christmas, my mother saw an advertisement for a used television in the Charlotte Observer.

“It’s only fifty dollars, Bob. I think we should get it.”

My father became evasive and made some excuse about it not being a good time to make such a large purchase. In actuality, he had already obligated the fifty dollars that my mother was suggesting he use to pay for the television.

Earlier in the fall, my mother had admired a set of silver candelabra in Gutman’s, an upscale gift boutique on Providence Road. My father had decided to surprise her with it at Christmas, and he gave the owner a small down payment to hold it until Christmas Eve, when he would pay the balance of fifty dollars and pick it up.

Not knowing about the candelabra, my mother thought he was being cheap and told him so.

“We’re the only ones in the neighborhood who don’t have a television and I think we should do this for the children. It’s a lot less than buying a new one. Besides, they go over to the Hart’s every day to watch Howdy Doody and I think it’s time we got a television so that we can reciprocate and have Carol over here. And you know how much you like to watch the Sixty-Four Thousand Dollar Question. You’re always going over to the Faul’s to watch that on Sunday night. If we had our own set, you could watch it at home.

My father relented, bought the television, and installed the antenna on the roof of our house. Betsy and I were thrilled to have our own television, with two channels—Channel 3 and Channel 9–and we couldn’t wait to invite all of our friends over to watch it with us.

No sooner had the antenna gone up than my mother received a frantic call from one of the youth Sunday school teachers at our church.

“Katherine, have y’all gone and gotten a television? I was driving by and saw the antenna. The youth group has worked all fall to raise enough money to buy Rev. Poerschke a television set for Christmas. They were planning to bring it over and surprise him with it on Christmas Eve. They are going to be so disappointed if he already has one.”

My mother assured the teacher that it was only a used television and that she would find a way to get rid of it before Christmas Eve. She also promised to keep the secret from my father.

“Don’t worry, Helen,” she said. “As a minister’s wife, I have learned the art of keeping things confidential. I’ll make sure Bob doesn’t suspect a thing.”

With that, she hung up the phone and began to devise a plan. First, she called the appliance store where the set had been purchased, to find out if it could be returned. The owner was a member of our church and graciously offered to send someone out that day to pick up the television and take down the antenna. He also insisted on refunding my parents’ money. (I suspect he may have gotten wind of what the youth were trying to do, and he may even have been the one to get the new set for them at a wholesale price.)

Next, she pulled my sister and me aside, explained why she was about to return our newly acquired television, and swore us to secrecy. We were excited to be included in the plan and were willing to trade the immediate gratification of keeping our used television set for the reward of surprising our father, as well as the prospect of receiving a brand new television.

When my father came home that night, all traces of the television had been removed. My mother met him at the door, with fifty dollars cash in hand.

“Bob, I decided that you were right. We simply can’t afford this television set right now with our tight budget and Christmas right around the corner. It was selfish of me to push you into buying it. I knew you’d try to talk me out of returning it, so I went ahead and made the arrangements to have it gone before you got home. Here’s the fifty dollars you paid for it. You can deposit it back into our account tomorrow.”

My father smelled a rat. “What about the girls? Aren’t they upset that you took it back?”

“Oh, no. They understood and they don’t mind watching television over at Carol’s for a while longer.” Betsy and I were just standing there grinning, and my mother gave us a stern look to remind us of our promise not to divulge the secret.

“I must admit that the money will come in handy.” He took the fifty-dollar bill, folded it, and put it in his wallet a little too quickly. No doubt he was thinking about the candelabra and was relieved that he would not have to dip into their savings to pay for it.

“But I’m curious why you changed your mind so quickly and am amazed that Betsy and Kathy gave up their television so willingly.”

“Well, I guess they just have the Christmas spirit.”

He started to pursue his line of questioning, but she smiled up at him and kissed him.“ Come on in the kitchen. I have your dinner ready. If you ask too many questions, you might spoil a Christmas secret.”

“Okay, but I just don’t understand why you…” He stopped in mid sentence when he recognized her expression—the pursed lips, the raised eyebrow and the narrowed eyes. We all knew that look. It meant that the conversation was over and that she would take it up with him in private when my sister and I were not around.

On Christmas Eve night, the members of the Youth Department at Myers Park Baptist Church all showed up at our door, carrying a brand new Philco 21-inch console television with a giant red bow tied around it. My father was genuinely touched by the gift and choked up when he saw all the eager faces of the youth, who were beaming with pride for having pulled off the surprise.

My sister and I, who were already as wired up as a string of Christmas lights in anticipation of Santa, could not contain our glee over the television. My mother must have breathed a sigh of relief that the secret was finally out and that she would no longer need to continue the subterfuge.

On Christmas morning, Betsy and I were up bright and early, despite having lain awake half the night in the upstairs bedroom we shared, straining to hear the sound of reindeer hooves on the roof.

As always, we sat on the stairway for what seemed like an eternity, forbidden to enter the living room until my father started a fire, turned on all of the Christmas tree lights, and got the camera ready for capturing our first glimpse of what Santa had brought.

When all of the packages had been opened and the floor was covered in tissue paper, ribbon and toys, my father said, “Wait a minute. I think there’s one last gift.” He disappeared into the hallway and returned with a giant box that had been elegantly wrapped.

Handing it to my mother, he said, “This is something you’ve admired and I wanted you to have it.” My mother’s eyes widened as she pulled off the gold Gutman’s seal, a foreshadowing of what was in the box. She removed the wrapping and opened the box. When she saw what was inside, she broke into tears.