This post was published on: 06/18/17 in the Book Reviews, Books category 0 Comments

Two Novels About the Suffrage Movement

Having recently published a novel about the suffrage movement of 1913-1919, Diana Forbes’ debut novel Mistress Suffragette piqued my interest. I purchased a copy on Kindle and began reading, curious to find how the stories would parallel each other. I wondered whether the main character would share similar traits with my own Hattie Robinson Barton, protagonist of In the Fullness of Time.

Set in the Gilded Age, Mistress Suffragette occurs two decades earlier than In the Fullness of Time. The story begins in the same year as the financial Panic of 1893. That’s at the onset of the Progressive Era of social activism and political reform, coinciding with  industrialization, that brought the country into the modernized world. New inventions like telephones, electric lighting, and refrigerators revolutionized how homes and business could operate.

Penelope Stanton is a feisty young beauty whose father has lost his shipping business in the panic. Determined to save the family from ruin, her mother seeks to match her daughter with a wealthy suiter. Then, at the Memorial Day Ball in Newport, Rhode Island, Penelope attracts the unwanted advances of millionaire banker Edgar Daggers. He’s a notorious philanderer and predator of helpless young women. Edgar promises Penelope financial security and invites her to live in New York as his wife’s secretary. This is a polite way of saying that Dagger’s wife has sanctioned her to become his mistress.

Penelope’s parents then learn of the arrangement and demand that she move to New York to take the Daggers up on their offer. However, Penelope flees to Boston, to escape Mr. Daggers and to seek work of her own choosing. There she finds employment speaking on behalf of the Woman Suffrage Movement. This will ultimately become the cause to which she dedicates her life.

Although headstrong and determined to maintain her independence, Penelope holds conflicted feelings for Mr. Daggers. He continues to pursue her and press her to accept his favors and the financial security that becoming his mistress would entail. However, She fights against the passion he stirs in her, knowing that if she succumbs, she will lose her reputation and her honor. And that’s really the only thing of value a woman possesses.

If Only a Woman Could Work, Could Hold on to Her Wages and Property

If only a woman could work, could hold on to her wages and property, could stand on her own financially. Then, she could make her own decisions and be free to love a man without fear of reprisal or loss of status. But the battle to attain a woman’s rights to a fair wage, property, and the franchise, is yet to be won.

Penelope  struggles to resolve her need for independence and self-fulfillment with her desire for a loving relationship with a man. Her life takes unexpected turns before she finds a satisfactory solution. She will also have additional encounters that cause her to question her taste in men altogether.

Her story is not unlike that of Hattie Robinson Barton, who struggles two decades later, albeit in rural South Carolina rather than urban Boston and New York, to reconcile her passion for woman’s suffrage with her duties as a wife and mother. (For more on South Carolina resistance to suffrage, read Ex-parte vs. Tillman )

Unlike Hattie, who is surrounded by a loving husband and family, Penelope has lost the financial backing of her parents. In addition she is deprived of their emotional support. However, she is a bit more socially connected and worldly than Hattie. That’s because she lives in the Northeast, an area of the country generally more tolerant of the changes both women seek on behalf of their gender, one in 1893, the other in 1913.

Though Hattie has the support of family, she faces an unsurmountable battle against the male supremacist politicians in her state when she joins southern suffragists in seeking an amendment to the South Carolina Constitution giving women the right to vote.

The elements of the stories differ in setting, place, and period. However, both embrace the themes of coming of age and strong female characters determined to make a difference in the world. They also depict the universal desire of the human heart to be independent, and at the same time bound in love to another.

Finally, anyone who enjoys women’s historical fiction will find Mistress Suffragette an engaging and easy read. It’s one of those books best consumed with a cool drink, an easy chair, and a good view of the ocean. And when you finish it, you might consider reaching for a copy of In the Fullness of Time. 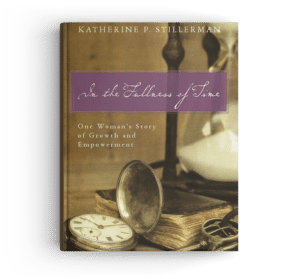