This post was published on: 09/19/18 in the Book Reviews category 0 Comments 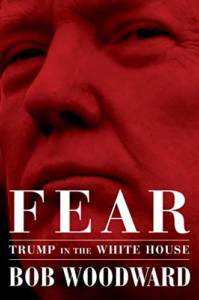 However, Michael Wolff’s decision not to identify his sources and James Comey’s obvious bias in attempting to exonerate himself after Trump fired him as FBI director, left both books lacking in credibility. I haven’t read Unhinged by Omarosa Manigault Newman, but I suspect that bias may be a factor in limiting the credibility of that book as well.

I’m Willing to Put Myself Out There. I’ve Done the Work.

With his best selling novel, Fear: Trump in the White House, Bob Woodward avoids the issues of credibility and bias that weakened the previous books. A highly respected, Pulitzer-Prize-wining investigative journalist, Woodward has no ax to grind. Employing time and patience, he meticulously secured the interviews and documents he used for his book–all documented in the source notes at the end of the book.

When Woodward appeared as a guest on the Late Show, Stephen Colbert asked him how he would respond to Trump’s accusations that he, Woodward, is a liar.

“I’m not.” Woodward replied. “I’m willing to put myself out there. I’ve done the work. This is the best reporting that I can do.”

In the opening pages, Woodward recounts how two senior staff members, Gary Cohn and Rob Porter, worked to derail Trump’s determined efforts to terminate the United States-Korea Free Trade Agreement (KORUS). They simply removed the draft of the termination letter from his desk. And the president never noticed it was gone!

This would not be the last time staff members would act to thwart the president’s impulsive and dangerous orders. Rob Porter is quoted as saying:

A third of my job was trying to react to some of the really dangerous ideas that he had and try to give him reasons to believe that maybe they weren’t such good ideas.

One of Trump’s major obsessions became that of  eliminating U.S. trade deficits. Trump was furious that the United States had an $18 billion annual trade deficit with South Korea and was spending $3.5 billion a year to keep U.S. troops there. Thus, he ordered the drafting of a letter to the President of the Republic of Korea terminating the KORUS agreement.

The agreement, based on a treaty dating back to the 1950’s, is essential to the South Korean economy. And, the American presence in South Korea is pivotal to  national security, in that it enables the U.S. to detect an ICBM launch in North Korea within seven seconds. The equivalent capability in Alaska takes 15 minutes. Withdrawal from the trade agreement could unravel the whole relationship.

A Nervous Breakdown of of the Executive Power

Trump was unimpressed with the briefs about the importance of KORUS to national security. Woodward writes:

Despite the almost daily reports of chaos and discord in the White House, the public did not know how bad the internal situation actually was. Trump was always shifting, rarely fixed, erratic. He would get in a bad mood, something large or small would infuriate him, and he would say about the KORUS trade agreement, “We’re withdrawing today.”

Woodward summarizes the reality faced by the White House staff:

The reality was that the United States in 2017 was tethered to the words and actions of an emotionally overwrought, mercurial and unpredictable leader. Members of his staff had joined to purposefully block some of what they believed were the president’s most dangerous impulses. It was a nervous breakdown of the executive power of the most powerful country in the world.

Throughout the remainder of the book, Woodward takes the reader through numerous examples that support his disturbing thesis of the nervous breakdown of the executive power, as well as the equally disturbing administrative coup d’état of the will of the president of the United States and his constitutional authority by his staff.

Woodward offers little content that is surprising or new, given the daily leaks escaping the Trump White House since the inauguration in 2017. However, in his careful and sometimes tedious reporting of events, several unsettling images emerge.

One is that of a president who often behaves like a willful child, demanding immediate gratification of his wishes despite their impracticality or in many cases illegality. This happened frequently over issues such as his  determination to end trade deficits and to withdraw from NATO, because “Why should the U.S. pay for European defense?” It burned him up that the U.S. kept its commitment, while other members defaulted on theirs.

Gary Cohn would do his best to dissuade the president by presenting mountains of data on the irrelevance of trade deficits on the economy, and by calling in Secretary of Defense and former Marine, James Mattis, to convince Trump of the importance of remaining faithful to U.S. allies.

But Trump considered collective defense a “sucker play.” After numerous attempts to convince him of the significance of the military and intelligence capability, Mattis concluded that the president had the understanding of “a fifth or sixth grader.”

Trump could be distracted or mollified for a while, until something would set him off again and he’d demand immediate action. “I want to sign something.”

Spooked by the Mueller Investigation

Another image is that of a president, spooked by the media coverage of the Mueller investigation to the point that he is easily distracted from the agenda at hand. When he learned of the appointment of the special counsel to look into Russian election meddling and any connection to the Trump presidential campaign, Woodward reports that Trump’s mood quickly deteriorated:

The next day, May 18, was the worst. The president erupted into uncontrollable anger, visibly agitated to a degree that no one in his inner circle had witnessed before. Normally Trump sat behind the Resolute Desk or in his private dining room. But this day, he mostly stayed on his feet as he stormed between the two rooms.

The president turned to his lifeline–cable news. he watched a two-hour block of Fox News, and then most of the two-hour-long blocks of MSNBC and CNN that he had TiVo’d.

The third image is that of a staff, scurrying around to block the impulsive and dangerous orders and demands of the president, ostensibly to protect the country from his actions. In some cases, this was done by stalling or delaying action. In more than one case, it was done by removing the papers from his desk. In one instance, the Security Council defied orders, when the president viewed the videos of the sarin gas attack on Syrian rebels and said, “Let’s go in. Let’s kill the fucking lot of them.”

Mattis had replied that they would get right on it. And then he told a senior aide, “We’re not going to do any of that. We’re going to be much more measured.”

This third image may be the most disturbing of all. It undermines the Constitutional process through which a candidate is elected by the people, and thus gains the authority to lead. It ultimately enables a small, non-elected body to engage in decision-making that they have no authority to make.

Our country experienced that dilemma in a simpler, more distant era, years before the instant communication of Facebook and Twitter. In 1919, President Woodrow Wilson suffered a stroke that left his left side paralyzed and his vision impaired. For seventeen months, Wilson’s wife Edith and Wilson’s doctor, Cary Grayson concealed the president’s condition from the public and essentially ran the government.

There are obvious differences between the Wilson situation and the one suggested by Woodward’s book. But the principle is the same. No group should usurp or undermine the authority of the president without going through the proper Constitutional procedures.

If things in the White House are as bad as Woodward’s sources reveal, then perhaps a slew of resignations coming from White House cabinet and staff would draw attention to the president’s inability to lead. Those who believe they are saving the country from the president by distracting him and mollifying him when he becomes unhinged, are suffering from the same disregard of law and custom as Donald Trump.

A Book Worth Reading

Though most of what Bob Woodard has written about the Trump White House is neither new nor surprising, it is well-researched and well-documented. That lends the book a credibility that makes it worth reading.