This post was published on: 08/5/18 in the Book Reviews, Books category 0 Comments 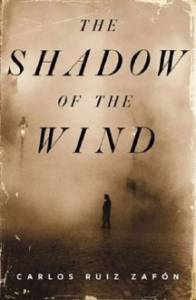 When Daniel Sempere turns ten, his father, a bookstore owner, takes him to a secret place. It’s called “The Cemetery of Forgotten Books,” an immense labyrinthine library preserving thousands of old forgotten titles. According to tradition, initiates to the secret place are allowed to take one book. Once chosen, the initiate must protect that book for life.

Daniel selects a book called The Shadow of the Wind, by Julian Caráx. He reads it that day and becomes enthralled with it. Afterwards, he searches for additional works by this unknown author.

To his surprise, he finds that no copies exist. Then, he learns that a man calling himself Laín Coubert, the name of a character in the book, has been seeking out Carax’s books for decades. His purpose is to buy and then burn them all.

Determined to protect the book and find other works by Caráx, Daniel is drawn to the mystery of the author’s past. He learns that several aspects of Carax’s life parallel his own. He’s even told he resembles the author in his youth.

In the course of his search, Daniel discovers a tragic love story between Julian Caráx and Pénelope Aldaya. It resulted in the disappearance of the lovers over thirty years ago, in 1919. He recruits the help of his mentor and sidekick, Fermín Romero de Torres to help him get to the heart of Caráx’s disappearance.

Fermín is a former spy in the civil war, who has now become a beggar. Daniel rescued him from the streets and persuaded his father to employ him in the bookstore. This flamboyant character often inserts moments of humor into the narrative. These usually appear through sarcastic expressions of disdain for the corruption of the current regime, or in the form of unsolicited advice to Daniel about his love life. Fermín’s antics create comic relief to an otherwise suspenseful  and foreboding story.

Set in Barcelona at the end of the Spanish Civil War, this story-within-a story unravels in a city pock-marked by war. Daily life grinds on in an atmosphere of fear and death. Survivors hang on with little expectation of better times among the ruins of bankrupt dynasties and corrupt secret police.

Within this gothic world of shadows and darkness, Zafrón shines his creative light on a large and varied cast of memorable characters. I’ve mentioned Daniel, the main character, and his friend Fermín, in their quest to find out what happened to Caráx.

Opposing and threatening them at every step is the despicable Francisco Javier Fumero, the arch protagonist. Fumero, the murderous police inspector, shares a past with Caráx–a past not completely revealed until the end of the story.

The interactions and complex relationships among the characters create the tension that carries the plot forward and makes the novel a page turner. That is, until the last third of the book when the point of view changes. A lengthy letter then carries the story almost to its ending. However, if the reader can hang on through this rather tedious section, the reward is a satisfying conclusion.

In creating the mood of this foreboding mystery, the author virtually personifies cold and dark and shadow and light as additional characters. His technique, while mostly effective, is sometimes overdone. I consider the following examples among the more effective ones:

A cold, slashing breeze swept the streets, scattering strips of mist in its path. The steely sun snatched copper reflections from the roofs and belfries of the Gothic quarter.

Shadows spread around Julian, and soon they would close in on him.

Slowly, almost ritualistically, I followed the trail of the candles and lit them one by one, conjuring up a halo of amber light that seemed to float in the air like a cobweb trapped between mantles of impenetrable darkness…

When I got out into the streets, it seemed as if darkness were creeping along the paving in pursuit of me.

A number of observations by, as well as descriptions of characters in the book, rise to the level of quotable quotes. A few of my favorites are:

Years of teaching had left him with that firm and didactic tone of someone used to being heard, but not certain of being listened to.

Antoni Fortuny was a man who felt he could talk openly only about hats. He locked his deeper feelings in the prison of his heart for months on end, until they became hopelessly embittered. He grew ever more bad-tempered and irritable. He found fault with everything…

One, Mrs. Aldaya has the mental age of a twelve-year-old; two, she suffers from a chronic narcissism that makes it impossible for her to see or understand anything that is not what she wants to see or believe, especially if it concerns herself.

When everyone is determined to present someone as a monster, there are two possibilities: either he’s a saint or they themselves are not telling the whole truth.

Sometimes we think people are like lottery tickets, that they’re there to make our most absurd dreams come true.

Making money isn’t hard in itself, he complained. What’s hard is to earn it doing something worth devoting one’s life to.

Bea says that a book is a mirror that offers us only what we already carry inside us, that when we read, we do it with all our heart and mind, and great readers are becoming more scarce by the day.

The intricate and clever plot; the author’s mastery of language; his ability to weave disparate characters into an intriguing story–all of these elements explain why the book is an international best seller. The weakness of the last section notwithstanding, the novel is definitely worth taking the time to read.

This book is on the reading list for the Book Marks Book Club. For more information see http://bit.ly/2neJ4Id.