This post was published on: 10/31/16 in the Writing category 0 Comments

It will happen at the strike of midnight tonight, after all the little ghosts and goblins have eaten the choice candy from their Halloween stashes and gone to bed. (God help their teachers when they arrive at school tomorrow. They’ll be exhausted from trick-or-treating and hungover on gummy worms, Reese’s Pieces, and Hershey bars.)

At the strike of twelve tonight, Halloween will become a stale memory, but NATIONAL NOVEL WRITING MONTH WILL have just begun. Between twelve o’clock on November 1 and 11:59 on November 30, thousands of Na-No-Wri-Mo participants around the globe will be competing against the clock to complete fifty-thousand word drafts of their respective novels.

I have signed up for the Na-No-Wri-Mo challenge. I’ll be writing like crazy to flesh out a novel, which I have tentatively titled Mountain Brook Memories: 1960-1963. Set in the early 1960’s, it’s about a preacher’s kid whose family moves to Birmingham, Alabama, into the affluent and highly segregated neighborhood of Mountain Brook.

The main character, Harriet Elizabeth Oechsner, is granddaughter of the protagonist in my first two novels. She’s faced with the challenge of being an outsider and of finding her place in a society steeped in tradition and staunchly resistant to change. The story will play out against the backdrop of the Cold War and the American Civil Rights movement. 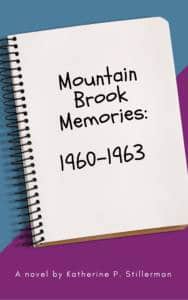 I began preparing for this writing marathon in October, by identifying  all of the major characters in my novel and by roughly plotting how each chapter will progress. Tomorrow I actually start writing.

The goal is to write at least 1660 words a day, but I will try to get ahead so that I can take a break during Thanksgiving weekend. I plan on posting my progress on this blog and on Twitter every day, beginning tomorrow after my first writing session.

I’m probably going to feel like a writing zombie by the end of these thirty days. Halloween may extend it’s tentacles into the month of November after all. But it will be worth it to have a finished draft of my novel, no matter how rough and ragged it may be. Hopefully, it will be well-crafted enough so that the editing process won’t be akin to The Night of the Living Dead.

Read More About NaNoWriMo and Wish Me Luck!

Okay, I know. I’ve milked the Halloween metaphor enough. It’s probably because I’m a little nervous to be facing that blank page tomorrow and I’m trying to distract myself.

It’s getting dark and I don’t think we’ll have any more trick-or-treaters. So, I’m going to turn off the porch light and put the left over chocolate in my Na-No-Wri-Mo survival kit.

You can read more about National Novel Writing Month at  http://nanowrimo.org/how-it-works and get updates on my progress on Twitter @kstillerman.