Go Set A Watchman Doesn’t Spoil To Kill a Mockingbird

This post was published on: 09/30/15 in the Book Reviews, Books category 0 Comments 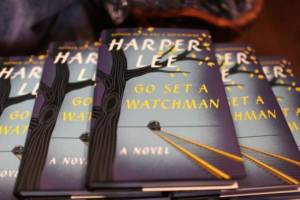 To Kill A Mockingbird, which came out in 1960, remains among the top picks for all time great Southern Fiction. Not so its prequel, Go Set A Watchman. In fact, since it’s publication in 2015, critics have debated whether it should have even been released. Partly out of curiosity over the conflict, and partly due to nostalgia over the first book, I decided to read it and form my own opinion.

A Strong Character Acts within that which Constrains Him/Her

In my previous blog, Writing Honestly About the Past, I explored the idea that a strong character is one who “acts within that which constrains him/her.” I interpret “constrains” to refer to the external political and social forces, as well as the internal emotions that influence the decisions and actions of any character. To a large extent, it is how a character responds to those constraints–both internal and external– that determines his/her fate in any given context of history.

I think that’s a core issue in Harper Lee’s highly contested novel, Go Set a Watchman, which I finally got up the courage to read about a month ago. I, like all the others, did not want my vision of Atticus Finch tarnished by viewing him as a segregationist.

After reading the book, nothing about To Kill A Mockingbird has changed for me. It is still the cherished story with a noble character who inspires. It also remains a beautifully written piece of prose that I want my grandchildren and all school children to read.

A great deal of controversy has surrounded the book. For example, some question whether Harper Lee’s  publishers exploited her. Others argue over whether Watchman should be considered a prequel to Mockingbird. Some–including highly acclaimed author Ron Rash–contend that the book should never have been published. Debate notwithstanding, I believe that the story is worth reading for its universal insight.

One Reader’s Analysis of Watchman

Here is my short analysis of Go Set a Watchman if you care to read it:

The reader identifies with Jean Louise Finch (Scout), whose discovery about her father forces her to recognize something in herself. It is the same bigotry which she despises in her family and the leaders of her racially segregated hometown of Maycomb, Alabama.

We who live in this highly polarized modern world have a lot to learn from Watchman. Admittedly, this book is not as satisfying or uplifting as To Kill a Mockingbird. That’s because we don’t get our classic hero. There’s no Gregory Peck-type Atticus Finch, who stands up for justice regardless of the cost.

Let’s face it, Mockingbird was a “Camelot” story. Thus, we will always cherish it. We will also teach it to our children. And, we’ll always return to it when we want to read beautifully written literary fiction with a noble character to inspire us. Nothing can change that.

Go Set a Watchman is unsettling and uncomfortable. That’s because it convicts every one of us. It forces us to look deep inside and identify in ourselves those traits which we find so objectionable in others. It confronts us with the ugly fact that we are all complicit, albeit in varying degrees, in contributing to intolerance and oppression in our communities.

Peeling Back the Layers of Bigotry

The lesson learned from Watchman is that by confronting our own bigotry and narrow-mindedness, we can no longer demonize and blame others for the social and political problems of the day. Consequently, we are now free to drop our self-righteousness. We can now drop the “us against them” diatribes. We can now exert our energies toward finding common ground and lasting solutions.

We sometimes discover that peeling back the layers of bigotry exposes the sweeter qualities of love and loyalty and fairness that also exist in ourselves and others. In that sense, the book is hopeful and optimistic.  I, for one, am glad Harper Lee published it.