“As Thy Days, So Shall Thy Strength Be”

This post was published on: 03/17/20 in the Writing category 0 Comments

This stack of letters I’ve been reading dates back to the World War II era. They’re from the correspondence my parents carried on with each other and with their families, between 1939 and 1946, when they were separated from one another during the course of the war.

Through these letters they reached out to one another in uncertain times, bolstered one another, and encouraged one another until the day when the war would end and they would be reunited. 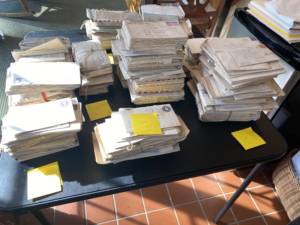 The Mail Meant Everything to Them

The mail meant everything to them. They spoke of their excitement in receiving it, “devouring” letters as soon as they arrived, and of feeling despondent when several days would pass with no mail, only to be overjoyed when finally the mailman would arrive with a pouch full of letters that had been delayed due to bad weather and the grounding of the planes carrying the air mail.

The letters are what kept them connected and grounded in a time when the world seemed to have turned upside down. I think it providential that I would have chosen to read them at just this moment, when our world has been turned upside down by the Corona Virus.

Scattered Throughout with Superlatives

Always, the letters began and ended with words of love and affection, scattered throughout with superlatives: the “sweetest children”; “the dearest mother”; “the most precious husband”; “the greatest little sister”; “the most marvelous brother”; “the very best aunt.”

Mostly, the person penning the letter would write about his/her daily routine and share news and gossip about friends and relatives–who had married, who had died or “honestly looked like she was on her last leg”; who was being sent over seas and whether it was a dangerous assignment; who “simply did not appreciate or deserve such a fine man as he.”

Often, a letter would include a newspaper clipping of interest or a letter from an aunt or cousin that was being passed around. Some of the letters were carbon copies. Since they tried to write every day, it became difficult to find adequate time to do that when there were multiple family members away from home.

Comforting Words from the Past Relevant Today

At times, the writing became particularly poignant as in the words my grandmother, or Nonnie as we grandchildren called her, wrote to my mother in December 1944, about my dad being sent overseas.

My mother and dad were newlyweds, and had been at the Marine Base in SanDiego for almost a year, where he served as a chaplain. They knew it was a matter of time before he would have to go out on a ship destined for some location in the Pacific. When that happened, my mother would return home to Greenville to live with my grandmother.

At the time the letter was written, the war was still in full gear. The thought of separation, not to mention the danger my dad might face, frightened and unnerved my mother, who was only twenty years old. Missing her mother and her family back home, she poured out her feelings in a letter, as any daughter might do.

My grandmother had faced her share of adversity. Her husband, my grandfather, died in 1935, after a long bout with depression, exacerbated by the loss of his fortune in the Stock Market Crash of 1929. She had to give up her home and was forced to find employment to support my mother, her son Schaefer, and her stepson, Frank. She was a strong woman who faced adversity with a deep and abiding faith in God.

When I read my grandmother’s response to her daughter, I felt the most compelling sense of connection. Her words are as comforting today as they must have been to my mother sixty-six years ago. That’s why I decided to share them in this blog.

“As thy days, so shall thy Strength Be”

Yes, honey, I know just how you and Bob feel about that thing of his leaving to go to sea, but we will just have to learn to live one day at at time and know that “as thy days, so shall thy strength be.” (Deut. 33:25).

If there ever was a time when we need to throw ourselves on God it is these awful times and when we need to have supreme and unshakable faith that God will keep and guide and protect our loved ones under whatever circumstances they may be placed.

Our God is greater than any of our heartaches or seeming insurmountable difficulties. God has not yet failed us and I am sure God will not fail us now in this most trying period of our lives. So, honey, let’s try not to become too frightened at what might come, knowing that we have the Omniscient God to take our troubles to.

It is only through my faith and confidence in God that I’ve been able to have the calmness to carry on as I’ve tried to face Schaefer’s going to sea, and now Bob’s. But God has given me a deep and abiding calmness and assurance that all will be well with our precious loved ones. So, when you are tempted to let it all overwhelm you, just stop and put it all in God’s hands and God will give you the strength you need.

I’ve seen the time when I not only had to live one day at a time but one hour at a time, but I was given the strength for that hour, so I know He will be our sufficiency for all times.

I’m convinced that in this current crisis, the kinds of messages we should be posting and texting and emailing to one another are words of love and appreciation and comfort. And, we should remind each other that we can get through this one day at a time. For “as thy days, so shall thy strength be.”

Thank you, Nonnie, for your legacy of love and abiding faith that reaches out through the years and touches us even today.