Responding to Our New National Reality

This post was published on: 01/26/17 in the Lifestyle category 0 Comments

I’m one among a vast number of Americans seeking to make sense of the new political reality. That reality was clinched by the swearing in of Donald Trump as forty-fifth President of the United States. Though I accept the results of the election, I’ve never made any bones about my concern over a Trump presidency. And, I’m having a terrible time coming to grips with it. See Why I’m Voting for Hillary .

My son Todd called late Friday afternoon to ask if I had seen the inauguration and to commiserate. (One of my greatest fortunes is that my husband, my four grown sons, and their wives–even the grandchildren–are all sympathetic with my political views. When it comes to politics, we are a family united.) I told Todd I had taped the coverage and was just sitting down to watch it.

It felt good to laugh. Friday, January 20 was a tough day for a lot of people to witness: patriotism, pomp and circumstance, and peaceful transfer of power notwithstanding. I’m pretty sure a sense of humor will be essential in processing this new reality.

Then came Saturday and the thrill of seeing all those women and men and children massing together in solidarity for women’s rights as human rights. And, it wasn’t only in Washington. All across the country and around the globe, people gathered to show their support. I was so proud to learn that my sister, Betsy, had marched in Raleigh and that two of my cousins had joined the march in Washington. I wish I’d been there with them.

Across the miles, I could feel their enthusiasm, strength, and power. At the end of the day, my hope had been renewed by the connection I felt to this vast movement of people seeking to build bridges of acceptance and tear down walls of bigotry. 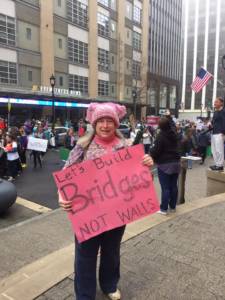 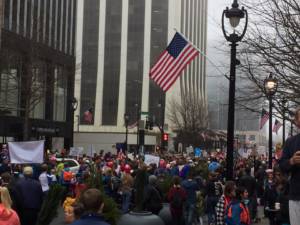 Then came Sunday, the traditional day for rest and relaxation, and for many of the faith-based community, a day for worship. I was out of town and did not attend church, but was wondering what on earth any pastor could say to shed spiritual enlightenment on the current political reality.

My son Bob is one of those pastors, and I was anxious to read his sermon, which he publishes weekly by e-mail. (see http://sardisbaptistcharlotte.org).

Bob based his homily on a passage from Matthew 4: 1-23, where Jesus said “Repent, for the kingdom of heaven has come near.” He explained that Jesus used the word repent, not to scare his listeners or threaten them with eternal damnation, but to call them into God’s presence, which means to love God, love neighbor, and live with empathy. Jesus’ call to repent is a call to “reshape, reorient, recalibrate, return your focus to God,” Bob wrote.

It means that our government will prioritize that privileged status over all else – it means that we are no longer a global people, but a local people.

It means that the American Dream is not big enough for a gracious empathy, nor a beacon on a hill, nor a New Jerusalem.

The American Dream is Stuck in the Muck

Instead, it means an American Dream stuck in the muck of the tangible: a place where consumerism, and patriotism, and jobs, and winning, and privilege, and power are seen as evidence of God’s blessing.

And friends, in this world of 24/7 news, we are bombarded with soundbites from every inch of the political spectrum that tell us our very value, our very humanity is linked to documents, and bank account balances, and healthcare coverage, and marriage certificates, and court orders, and political parties, and jobs, and homes, and clothes, and on and on and on.

And in the midst of this chaos, the ancient words had better call us to attention: Repent, for the kingdom of heaven has come near.

Reshape your lives, reorient your priorities, recalibrate your sense of empathy, return your focus to God.

Bob ended his sermon with these comforting words

God is our source. And God is our creator. And God gives us our humanity. It is what binds us. And it is neither little, nor common. And no news cycle, no government, no troubled past, no good job, no family separation, not even death, will prevent us from the community of God’s beloved.

Inevitability, Monday arrived. Time to get to work! Time to “walk the walk,” as they say. The question of how to respond to our new national reality persists. However, the eventful weekend suggested three answers that I can embrace.

My Mind Has Embraced it But My Heart Keeps on Bleeding

From time to time, I may still relapse into second-guessing about missed opportunities and what might have been. After all, we came so close to putting a qualified woman with global perspective in the White House! Instead we chose an unqualified misogynist nationalist. (God help me! I did it again.) However, I’m one step closer to accepting the current political reality. My mind has embraced it but my heart just keeps on bleeding.

I say to my heart, “You have to accept what is before change can occur. You can’t keep bleeding over the past.” My heart seems to warm to that idea. I can tell by the way it quickens. I’m pretty sure when my heart is finally in it, I’ll be ready to move forward.

Tomorrow’s Reality is an Open Window

In truth, no amount of remorse or worry or angst or blame can change today’s reality. That window of opportunity has closed and been nailed shut. However, tomorrow’s reality is an open window that will be determined by the work we undertake in the present.

My hope is that our future will be shaped by the bridge-builders, not the wall-builders; by those who value global connection over America-first nationalism; and by those committed to narrowing the gap between haves and have nots, not those who seek to widen it.

My heart is in this hope. It is finally ready to heed the advice of my intellect, which tells it to stop bleeding over the past and get to work turning hope into future reality.