Thanksgiving Menu Served Up with a Touch of History

19 Nov Thanksgiving Menu Served Up with a Touch of History 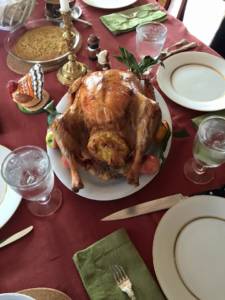 Too Much Chocolate Cake

My Thanksgiving Menu has been tested and refined for two generations now. It’s based upon the culinary wisdom of my mother and grandmother, and certain relatives and friends who are the best cooks I know. The menu has been adapted to cater to the tastes of my husband, my children, my daughters-in-law, and now my grandchildren. There is a rich history behind this menu, which I will share in this blog, along with the recipes.

The pièce de resistance! I”ve tried baking it, frying it, stuffing it, not stuffing it, pouring mushroom soup over it, and brining it. But two years ago, I got directions from my daughter-in-law Katie’s mother Joann, and I’ll never fix it any other way again. Here are the directions:

Prepare stuffing. (see below). Rinse the bird in cold water and pat dry. Cut thin pats of butter and stuff them under the breast skin. (Just take your fingers and pull the skin away from the breast and poke that butter right in there. You won’t believe how moist it keeps the bird.) Stuff the bird before it goes in the oven. Don’t pack the stuffing too tight but don’t be afraid to push it in there. Extra stuffing can go under the skin of the breast and in the backside, which turns out to be the crispiest part that everybody fights over.  Bake according to the instructions on the wrapper the turkey comes in, based on the weight of the bird. I usually cook a 12-15 pound turkey.

This recipe is like the one my mother and grandmother made. However, I learned it from my friend Nancy in Mount Gilead, NC. It was the first Thanksgiving I had to cook for everybody in the family and I was terrified. Nancy is a marvelous cook and she sat me down at her kitchen table and told me what to do step by step. This recipe can be baked in a pan or stuffed in the bird. If used as stuffing, you’ll want to add more broth and make it thinner. The recipe below makes about two 8 x 10 pans and is more than enough to stuff a bird and have a small pan to cook with it.

I always bake the cornbread and biscuits several days ahead and chop the onions and celery and store in airtight containers in the refrigerator. That way, I just have to assemble the ingredients before cooking.

6-8 biscuits–I use the ones you buy frozen and bake. Nancy made hers from scratch.

1-2 boxes of Jiffy Cornbread Mix–prepared according to package directions.

Sauté celery and onions in butter. In a large bowl, crumble the biscuits and cornbread. Add the eggs, the vegetables, and season with salt and pepper and poultry seasoning.

Pour chicken broth over the mixture and stir. Keep adding broth until the mixture is to your liking.

Spread in baking dishes and bake at 350 for an hour, or stuff in turkey.

In a medium saucepan, bring stock to a boil. In a small bowl dissolve the flour in water. Gradually whisk into the turkey stock. Season with poultry seasoning, salt, pepper, and celery salt. Bring to a boil, reduce heat and simmer 8-10 minutes until thickened.

My family likes the traditional Green Bean Casserole that is on the French’s Crispy Fried Onion can. I have listed the ingredients below. I have also posted a fresh green bean casserole that is absolutely delicious, but a bit more complicated. It’s worth the trouble if you want something really gourmet.

I assemble the casserole the day before Thanksgiving and keep it refrigerated. That way it’s ready to pop in the oven on Thanksgiving day.

Cook beans in boiling, salted water for about 3 minutes, or until crisp. Transfer to a bowl of ice water to stop cooking. Drain again and set aside.

Pour the cup of boiling water over the dried mushrooms. Cover and let stand for 15 minutes.

Cook bacon until crisp. Transfer to small bowl lined with a paper towel and crumble bacon. Reserve 1 tablespoon of the bacon drippings and cook the cremini mushrooms in it until lightly browned. Stir in the garlic. Cook and stir for 1 minute more. Remove from heat and stir in the green beans.

Remove the dried mushrooms from the water but do not discard the liquid. Chop the mushrooms and add to the green beans.

If serving the same day, stir the sauce into the bean mixture and pour into a 2-quart square baking dish. Bake 25-30 minutes at 376 degrees, or until bubbly. Top with bacon and bake 5 minutes more. If making ahead of time, transfer the crumbled bacon, green bean mixture, and sauce into separate airtight containers. Cover and chill for up to 24 hours.

This is my mother’s recipe and an old family favorite. The recipe is at it’s best when using fresh summer squash, but you can usually find decent squash in November.

Cut squash in pieces and boil, along with the onions, until tender. Salt the water before boiling. Drain squash/onions and squish up with a fork. Drain again.

Beat egg slightly and add to the mixture. Add sugar. Salt and pepper to taste. Put squash in a baking dish and top with crushed Ritz Crackers. Dot top of crackers with butter.

Bake at 350 for 1 hour or until crackers are crisp and brown.

I usually assemble this dish a day ahead and keep it refrigerated to bake on Thanksgiving Day.

This is another of my mother’s recipes. She used to put the potatoes in shallow pie pans so that the ratio of potato to marshmallow would be almost 50/50.

Boil sweet potatoes until tender. Drain and put in mixing bowl, with butter, brown sugar, and nutmeg. Beat or mash until smooth.

Transfer the potato mixture to a baking dish or pyrex pie pans. Top with mini marshmallows and bake at 350 until marshmallows brown.

This casserole can totally be made and frozen prior to Thanksgiving. Thaw and top with marshmallows. It’s ready to heat up for the Thanksgiving meal.

This is an easy, no-fail recipe and a real favorite for the segment of our family who are corn lovers.

Salt and pepper to taste

Mix all ingredients and pour into an 8x8x2 inch pyrex dish. Bake at 375 degrees for 45 minutes or until the top sets.

I usually assemble this casserole the day before and bake on Thanksgiving Day.

I got this recipe from my son Harry, from back in his single days, when he made it to take to a social event. He passed it on to me and I’ve used it ever since.

1 can Campbell’s Cream of Chicken soup

Spray 3 quart casserole with Pam and put in mixture. Mix melted butter and crumbs and sprinkle on top. Bake in preheated oven at 350 degrees for 1 hour.

This casserole can be made and frozen prior to Thanksgiving. Just heat and serve when ready.

I started making this last year as a substitute for the cranberry sauce I always make and end up pitching down the drain uneaten. I will also post a good cranberry recipe for those traditionalists who still serve it.

Combine olive oil, vinegar and 2 tablespoons cranberries in a food processor. Process until berries are finely chopped, about 30 seconds. Allow to set for 30 minutes at room temperature.

Pour dressing into the bottom of a salad bowl. Add remaining ingredients. Season with salt and pepper and toss to combine and coat in dressing.

I usually make the dressing a day ahead and store in the refrigerator. I also toast the walnuts and have them ready.

I began using Sister Shubert Parker House rolls when our grandson Jack was little and it was absolutely all he would eat. We would all have our plates packed with turkey and dressing, and there would be Jack, with a pile of rolls, which he called “buns,” on his plate. Jack’s palate has matured and he will eat lots of other foods now. However, all the other grandkids love Sister Shubert rolls too, and I usually buy four or five tins of them.

I keep these frozen until the day before Thanksgiving and then let them thaw. They heat up much quicker that way, and when all of your casserole dishes are competing for oven space, this helps.

Wash and pick over cranberries. In a saucepan, bring water and sugar to a boil. Reduce heat and simmer for about 10 minutes or until cranberries burst.

This can be made and refrigerated several days ahead.

This is my mother’s recipe, which she wrote out for me and included the cute little drawing of the pumpkin. Most people love it, even if they aren’t partial to pumpkin pie. It tastes best with a big blob of real whipped cream on top. I make the pies the day before Thanksgiving. I whip the cream the day before as well. (Whip a pint of cream until it forms soft peaks and then add a half cup of sugar. Beat until stiff and then add a teaspoon of vanilla.) 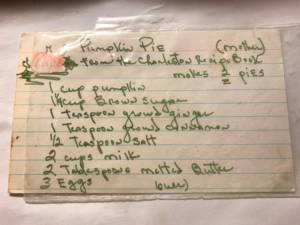 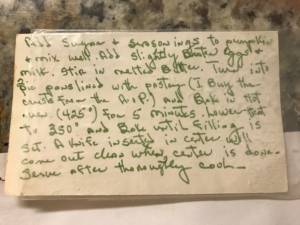 Too Much Chocolate Cake

(This recipe was revised on 11/30 to include 1 cup of oil, which was left out originally. Sorry for the error!)

I have not tried this recipe but I always like to make a really chocolatey dessert for my daughters-in-law who are all chocolate lovers. This recipe looks so easy. If it’s as good as I think it will be, it may become a permanent item on the Thanksgiving menu.

Bake 50-55 minutes or until top is springy to the touch and a wooden toothpick inserted comes out clean. Cool cake in pan for at least an hour before inverting onto a plate.

Dust with powdered sugar or make a ganache icing to drizzle over the top.
I’ll make this the day before Thanksgiving.

Another tradition our family has adopted is to run or walk in the 5k Turkey Trot early Thanksgiving morning. All participants are asked to bring 3 cans of food, which is being collected for the Second Harvest Food Bank. I just bought two large bags of groceries for us to take with us and I’m putting the grand kids in charge of that.

After the race, we will all head over to the original Krispy Kreme Donut shop on Stratford Road and pay homage to one of Winston-Salem’s claim to fame. Then, we’ll head home and get the turkey in the oven in time for a late afternoon meal.

Happy Thanksgiving to all of you.