This post was published on: 09/13/15 in the Writing category 0 Comments 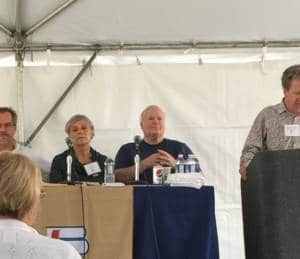 Southern Writers Love to Tell Stories About Themselves

At the Winston-Salem Bookmarks Festival on Saturday, I arrived early to get a seat for the session entitled Southern Literature Today. One of my all time favorite authors, Pat Conroy, was on the panel, along with his wife Cassandra King, and best selling author Ron Rash.

The event had been scheduled into Reynolds Place, the largest room in the Milton Rhodes Center. Good thing I got there when I did, because the room filled to capacity a good thirty minutes before the session even began.

Dressed in his signature blue blazer and khaki pants, Conroy led off by saying that one thing unique about Southern writers is that they love to tell stories about themselves.

Southerns Have so many Idioms not Understood Outside the Region

Cassandra King added that the voice and richness of the language makes Southern writing distinctive.

Southerners have so many idioms that may not be understood outside of the region.

“But that’s not what I meant to write! She would have said “go” not “mean.”

King added that people outside of the south complimented her on how clever she was to think up the idea of crowning a queen at a cotton festival. “I didn’t think that up,” she said. “That was real.”

One Place Understood Helps Us Understand Other Places

Ron Rash questioned whether Southern literature is so much different from that of other regions and quoted Eudora Welty, who said “One place understood helps us understand other places.” Rash then read an excerpt from his latest novel, Above the Waterfall, set in the Appalacian Mountains. https://amzn.to/2LjgILs.

He said that the new novel explores the theme of wonder. “I wanted to understand what it’s like to view life with no filters/no screens.” Conroy kidded him about his novels usually being so dark and Rash said that this passage was about as light as it gets for him. Rash named his favorite books as Moby Dick and The Sound and the Fury.

He had not planned to do another novel because it usually takes him about three years to complete one. But the idea for Above the Waterfall began to take shape in his mind and he knew he would have to write it. He doesn’t plot his stories, but begins with an image.

Every Southerner Has at Least One Crazy Relative

Conroy said another distinctive thing about Southern literature is that everybody seems to have at least one crazy relative. He related an incident that took place at Rich’s Department Store in Atlanta. It happened during a book signing for Prince of Tides.

“I loved Rich’s,” he prefaced. “My grandmother worked there in the fur department years ago, and she was always so proud to tell people, ‘I was in notions.'”

Conroy went on to say that a perfectly groomed young couple approached him. “Both of them had huge eyes like Weimeraners, and blond, silky hair.” They told him they were from Chapel Hill and after he signed their books, the man said, “Can I ask you a question?”

The man said, “Were your relatives crazy?”

Conroy said, “Yes, they were. And I’m sure you have a few crazy relatives too, don’t you.”

“No,” said the man indignantly.

“Oh, I bet if you go back far enough, you’ll find one. Maybe a grandmother, or an aunt or uncle, or even a brother or sister?”

The man said that all his relatives had been upstanding, nurturing, kind, and sane people. At this point his wife gave him a look of incredulity and said, “That is not true. Your Mama’s crazy.”

During the question-answer session, someone asked about how Southern authors deal with the redemption of a character. Conroy said that one reason we write is to see if bad people can change. “But you can never deny the humanity of the characters, and some characters just can’t be redeemed.”

“And sometimes redemption comes in ways you may not expect.” Offering as an example his father, upon whom most of his books were based, Conroy went on to explain that his father never apologized or even acknowledged his abuse and brutality of his wife and children for all the years Conroy was growing up.

But, in the love he showed to his grandchildren and to his daughter-in-law, there was evidence of redemption in his character. Conroy said that if his father had died when Conroy was a young man, he would not have been present at the funeral. As things turned out, when his father died in 1998, all the family attended and wept at the burial.

Later in the afternoon, I attended another session moderated by Conroy, where I took the picture posted above. It was held at the Downtown Stage, located outside in the parking lot. Conroy was at his best in this informal setting, and had changed into a t-shirt.

In 2013, Pat Conroy became editor-in-chief of Story River Books,(http://bit.ly/2NJMRZp), a Southern fiction series published by the University of South Carolina Press. Accompanying him at the session were three of the authors whose books are a part of the series. Conroy introduced each one, told what was unique about his/her writing, and invited each to comment.

About John Lane, author of Fate Moreland’s Widow, he said, “I love the name Fate. (http://bit.ly/2OeSboE ). Only in the South would that name make sense.” He then began to share some of the crazy names of his own relatives–Jasper Callett, Clyde Pluma, my grandmother Vashti, and an uncle named Jerry Myer, who his aunt explained was named after the Old Testament prophet Jeremiah.

About Eric Morris, who wrote Jacob Jump (https://amzn.to/2JWJzQc), he said that he’d never seen a book written about Augusta–“If you are looking for something to write about, find a place that no one has written about before–immortalize a town.”

Conroy said Morris’s treatment of the river as life and transportation captivated him as an editor. Morris writes about the 184 mile journey downstream from Augusta to Savannah. The story is reminiscent of the writing of James Dickey, one of the authors who greatly influenced Conroy.

Conroy asked him to describe the plot of Jacob Jump. Morris said, “Have you ever been compelled to walk away from everything you’ve ever known?” He said that the book is about running away and looking for what’s next, and finding what you don’t expect to find.

Conroy had nothing but praise for Soon (http://bit.ly/2NDMfEm), by Pam Durban, Professor of Creative Writing at UNC.

“I told John Haupt, the director of USC Press, that she’d never publish with a small operation like ours.” Conroy described Durban’s writing as “magical.” Later, when he asked if anyone had questions of any of the authors, he told the audience, “You must be intimidated. I shouldn’t have told you Pam was from Chapel Hill.”

Durban explained what her collection of short stories is about.

I suppose all authors have their required subject matter. One of mine is war–its aftermath and how it rolls through families and continues to influence them.

She read one of her short stories of a woman telling how she had met her husband and how she had come to love him. Then, I could understand why she’s so highly regarded as a writer. Her mastery of language is awe-inspiring and intimidating.

I Should Have Written Children’s Books

Pat Conroy bemoaned the fact that Southern Literature/literature in general is “having a hard time.”
“I should have written children’s books,” he said. And then he pointed across the parking lot to the book-signing lines for Marc Brown and R.L. Stine. “All these indulgent parents buying books for their overindulged children…”  Everyone laughed at the incomparable Pat Conroy!