This post was published on: 03/3/20 in the Writing category 0 Comments 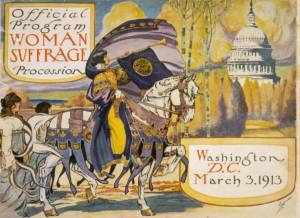 On March 3, 1913, the eve of Woodrow Wilson’s first inauguration, the National American Woman Suffrage Association (NAWSA)  organized a parade down Pennsylvania Avenue. It rivaled the inauguration itself in terms of pageantry and attendance. The march, which turned violent with hecklers and detractors, marked the beginning of a resurgence among suffragists to bring about an amendment giving women the right to vote. It would take seven long years of disappointment and struggle before the Susan B. Anthony Amendment was finally ratified for women to vote in the 1920 election.

In 1912, the Democrats won control of the presidency for the first time in twenty-four years. They also held majorities in both houses of Congress. The Woman Suffrage Procession, as stated in the official program, was held “in a spirit of protest against the present political organization of society, from which women are excluded.”

The parade was organized by Alice Paul for the National American Woman Suffrage Association (NAWSA). It included over eight thousand marchers, four mounted brigades, twenty floats, and an allegorical performance near the Treasury building. In organization, color, and pageantry, the march became a spectacle that reputedly upstaged the inauguration itself.

Hattie and Alice Stood Among the Crowd

Hattie Robinson Barton, the main character in my novel, In the Fullness of Time, was there with her sister-in-law Alice Barton Rivers. As they stood among the crowd, this is what they witnessed:

A river of marchers flowed toward them in one vibrant wave of color, led by a stately woman who sat atop a white steed carrying a banner proclaiming: We demand an amendment to the Constitution of the United States enfranchising the women of the country.

Hattie had never seen a spectacle like this in all her life. It was a pageant of epic proportion, choreographed with an artist’s eye for color, texture, and detail.

Behind the banner marched the parade ushers and officers of the National American Woman Suffrage Association, followed by a regent band playing a festive tune.

After the band came a host of international delegates representing the countries where women’s suffrage had been granted. Hattie recognized the banners of Finland, New Zealand, and Australia.

Banners of countries where women had partial suffrage followed: Sweden, Denmark, Iceland, Great Britain, and Belgium. The Pioneers, representatives from states where women had gained the vote, followed the international delegation. 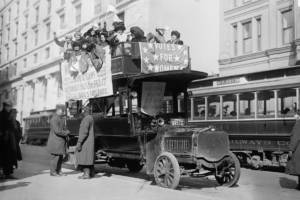 She wanted to join their Cause, to Be Just Like Them

“Look,” said Alice, pointing to an approaching double-decker bus teeming with suffragists.“Those women made the suffrage hike from New York City. Rosalie Gardiner Jones organized it, and they have been on the road since February. They marched over two hundred and twenty-five miles.”

“Honestly, Alice, you never cease to amaze me with the people you know. Who in the world is Rosalie Gardiner Jones?”

“She’s a socialite from Oyster Bay who is a dedicated suffragist. They call her General Jones.”

Another band marched by as Hattie stood, amazed by these brave, elegant women gathered from all corners of the nation and the world, single-minded of purpose, standing up for their sisters and refusing to be intimidated or distracted from their mission.

She wanted to join their cause, to be like them—to stand with them and demonstrate the same determined grace in the face of opposition.

The women in the parade, along with a contingency of men, marched with dignity and purpose, in contrast to the levity of the onlookers, who appeared to be regarding the event as a carnival or circus.

On that day in 1913, Hattie and Alice participated in the official kickoff of a movement to gain a constitutional amendment giving women the right to vote, a movement built on the pioneer work of women like Elizabeth Cady Stanton and  Susan B. Anthony.

For seven years, these dedicated suffragists faced resistance and heartbreaking setbacks to the furtherance of their cause. Finally, on August 18, 1920, politics and public sentiment coalesced on the floor of the Tennessee legislature in favor of suffrage, providing the final ratification vote to the Nineteenth Amendment, just in time for women to vote in the 1920 presidential election.