I never have bought into the behavior modifications suggested for dieters. For example, using a smaller plate to trick your eyes into thinking you’re getting more to eat than you really are.

I don’t do positive affirmations or take a walk around the block to distract myself from wanting to snack on cookies and chips.

I don’t even purge my refrigerator and shelves of sugary foods before beginning a new eating regimen. Because I know that if I should decide to indulge, my determination and creativity know no bounds when it comes to availing myself of food. I will find a way to have something sweet or die trying!

But I came across a behavior modification product several months ago that I thought might just work for me.

An Antidote to Overeating…and Curb Snacking 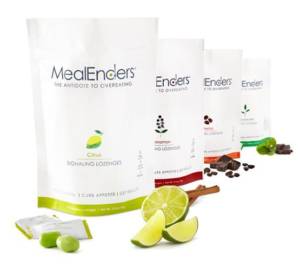 an antidote to overeating–a way to beat overeating, master portion control, and curb snacking by clearing cravings from the mouth and mind.

The product, which is a pre-packaged lozenge, is stimulant free and comes in mocha, cinnamon, and chocolate mint flavors. It’s about the size of an after-dinner mint. Because each one is packaged separately, they can be carried in your purse or tucked into a drawer.

Instead of eating a second helping at a meal or having another serving of a snack, you open a Meal Ender and allow it to melt in your mouth. This is a signal to your brain to stop eating.

Since each lozenge contains only 15 calories, you could even have a second one if you’re still feeling the urge to eat. It sounded like a good strategy to me. I always crave something sweet at the end of a meal. Thus, I thought I could replace my low calorie dessert with a Meal Ender.

It’s a clever idea. I wish I had thought of it first!

I sent off for a package of 25, but by the time it arrived, I had begun my 30 days of Whole 30. Since the lozenges contain sugar, one of the prohibited food groups, I put the package away and forgot about it.

Recently, I got it back out and tried the chocolate mint flavor. The directions say not to bite or chew the lozenge but to let it completely dissolve in the mouth. The first layer was chocolate, melted quickly, and tasted delicious. Beneath the chocolate layer was a hard candy with a mint flavor. It was tasty as well.

As the lozenge dissolved, the mint taste was replaced by a peppery flavor that grew hotter and hotter. I resisted the temptation to bite down on it and finish it off, or to spit it out. By the time it melted completely, my mouth was stinging like I had sprinkled cayenne pepper into it. I definitely did not want anything else to eat, nor did I desire to ever eat another Meal Ender.

I still think the idea of the Meal Ender is a clever way to cue an overeater that it’s time to stop eating. Those who like their food muy caliente, may want to give it a try. But for me, the pepper treatment at the end was a bit like what I suspect it would feel like to have your mouth washed out with soap. The lozenge seemed to be saying,

This will teach you not to put another bite of food in your mouth until dinner.

For other blogs on diet, see The Skinny on Losing Weight.