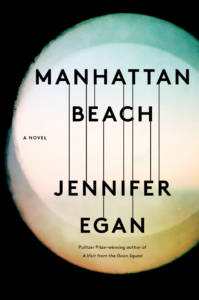 Manhattan Beach is a novel of suspense, wrapped around a triangle of characters whose lives become extricably intertwined on a winter day in 1934, when 11-year-old Anna Kerrigan visits the Brooklyn shoreline with her father, Eddie, and an underworld figure named Dexter Styles. Though each character will go in distinctly different directions, they are destined to meet again. The mystery is not if but when they will be drawn back together.

The story leaps ahead to the 1940’s where New York City has been transformed by America’s entry into World War II. Anna is working in the Naval Yards, the first and only female diver repairing ships. The job is dangerous but pivotal to the winning of the war. Her father’s whereabouts are unknown. Styles has risen to fame in the New York mafia and is struggling with a sense of purpose.

A part of the mystery is the kept secrets of the characters revealed through meetings that take place and are never to be spoken of, money changing hands with expected outcomes, and deceits springing from infidelity, murder, and misrepresentations of paternity. But the cost of secrecy is dear. As the plot unfolds, it becomes evident that the truth must come out so that personal liberty can begin.

This is a beautifully crafted story in terms of characterization, description of setting, and delivery of plot.