Women and world War II: The Nightingale by Kristin Hannah

This post was published on: 03/6/21 in the Book Reviews, Books category 0 Comments 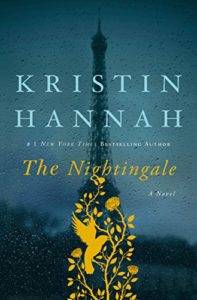 Readers who like historical novels with heroic female characters will want to read The Nightingale by Kristin Hannah. Set in World War II France, the story does not unfold on a battlefield with soldiers in combat. Rather, it takes place in the Loire Valley town of Carriveau. It is there that Vianne Mauriac lives with her husband Antoine and their daughter Sophie. She teaches at the local elementary school with her childhood friend Rachel.

Hitler’s army breaks through the Maginot Line and invades Paris. This forces Antoine to leave Vianne and Sophie alone to join the men of Carriveau in defending the country. Shortly after his departure, thousands of refugees flee south to safety. They flood the roads and overrun the small towns in search of food and lodging.

Traveling among them is Vianne’s younger sister, Isabelle Rosignol. After her expulsion from numerous boarding schools for her impetuous and headstrong behavior, Isabelle was sent back to Paris to live with her father. Julien Rosignol is an emotionally scarred veteran of the Great War, who had abandoned his daughters after their mother died of cancer. In addition, he is now an alcoholic.

With the bombing of Paris, Julien remains to protect his bookstore. However, he sends Isabelle away from him once again to live with her sister.

On her journey south, Isabelle encounters Gaetan, a released prisoner who is on his way to join the French resistance led by Charles de Gaulle. In Gaetan, Isabelle finds both the purpose she has searched for and the man she will always love. Gaetan is equally in love with Isabelle. However, he senses she is too young to commit to the cause. Thus, he  abandons her after he sees her safely to her sister’s home.

Conflict Between the Sisters

Because she is devastated by Gaetan’s rejection and her lost opportunity to make a difference in the war, Isabelle becomes reckless and outspoken. Her actions place Vianne and Sophie in danger of the German authorities. Troops have now occupied Carriveau and have imposed hardships. The Germans severely ration food,  such as severe food, set curfews, and confiscate of  all radios and vehicles.

Isabelle’s restlessness highlights the tension that has always plagued the relationship between the sisters. Whereas Vianne has grown into a woman who seeks safety for her daughter and preservation of her home at all cost, Isabelle has become a woman determined to push against convention and regulations regardless of the consequences.

Underlying the tension, is the grief both girls share over the death of their mother and the rejection by their father. For each girl has handled the grief in her own way.

When she discovers a local vein of the French resistance, Isabelle becomes involved in the highly dangerous task of distributing tracts to spread the word of de Gaulle’s efforts to reject the armistice and fight to free France. She keeps her work secret from Vianne. Her excuse for leaving the house at dawn every day is that she wants to be first in the ration lines. Vianne assumes that she is probably sneaking out to meet a lover.

When Wehrmacht officer, Captain Beck billets in Vianne’s home, Isabelle realizes that her inability to control her anger poses a threat to the safety of her niece. She tells Vianne she is leaving. She concocts the excuse that she is running off to meet Henri, a man who she “may love.” Vianne believes the frivolous excuse, based on Isabelle’s past behavior, and lets her go in disgust.

Isabelle makes her way to Paris, where she imposes herself on her father. She insists that she will stay with him and help with the bookstore, despite his drunkenness and his continued efforts to distance himself from her. There, she easily connects with resistance operatives. She also discovers that Gaetan is the one who has recommended her to the movement. And, she is shocked to learn that her father, Julien Rosignol, has always been a sympathizer.

Isabelle earns the ultimate trust of leaders of the Resistance when she brings to them a wounded British pilot who she has protected and sheltered. She takes on the task of leading the pilot to freedom through a treacherous pathway across the Pyreneese Mountains and into Spain. This is the first of numerous treks in which Isabelle shepherds Allied pilots to safety. She sacrifices her love for Gaetan and endures great physical hardship in the cause that becomes her life’s purpose.

Vianne Chooses a Path of Sacrifice and Risk

Vianne remains in Carriveau, attempting to protect Sophie and maintain her home until the war ends and Antoine can return. Conditions become unbearable as rations for food and fuel grow scarcer. Even worse, the Nazi regime begins targeting and exporting Jews and separating mothers from their children.

When Rachel is taken away and her daughter Sarah is shot,Vianne is left to care for Ari, her friend’s young son. Now she must abandon her plan to keep a low profile and avoid harm to her daughter in order to ensure the survival of Ari and the other children left motherless. She is unaware of her sister’s heroic sacrifice as “The Nightingale.”  However, the path Vianne chooses will require equal sacrifice and risk. Both sisters will discover the narrator’s claim:

The Story Shifts in POV From First to Third Person

The narrator is introduced in the first person in chapter 1, as an aging  woman living on the Oregon Coast in 1995. Her identity is not revealed until the last chapter. Her husband is deceased and she has been diagnosed with terminal cancer. Thus, her physician son has persuaded her to move to a nursing home to live out her days in safety. While going through an old trunk in the attic, she is reminded of the war and events that transpired in her earlier life. She  contemplates their meaning:

As I approach the end of my years, I know that grief, like regret, settles into our DNA and remains forever a part of us.

The narrative shifts to third person in subsequent chapters, as the author explores the question of how far women left behind in war will go to protect their loved ones. Mother Superior Marie-Therese provides a partial answer when Vianne seeks her counsel. Vianne confesses that it was her fault her friend Rachel was fired from her job as a teacher.   The firing happened after Vianne identified Rachel as a Jew, when questioned by Captain Beck, the Wehrmacht officer billeting in her home:

As the war goes on, we will have to look more deeply. These questions are not about them but us…Don’t think about who they are. Think about who you are and what sacrifices you can live with and what will break you.

Ultimately, that advice prompts  Vianne to abandon her fears. She endures great personal danger and sacrifice, engaging in a subterfuge that will save the lives of dozens of Jewish children.

In Times of Peace, The Two Could Have Easily Been Friends, and Even Lovers

Questions about war and blind loyalty surface in the relationship between Vianne and Captain Beck. Beck is a husband and father separated by military duty from his family. He’s not unlike Vianne’s husband, Anthony. He obeys the senseless commands of his superiors, even to the point of carrying a whip to herd Jews onto trains and out of the country. However, he warns Vianne that her friend Rachel should escape immediately when he discovers the plan is to shoot rather than transport them.

Their growing attraction for one another repulses Vianne. Yet she is unable to control her feelings for Beck, the enemy. They both discover the internal conflict imposed by war. In times of peace, the two could have easily been friends, and even lovers.

Tendency Toward Sentimentalization Does Not Spoil the Book

The sequence of historical events was hard to follow at times. And I agree with the critics  who have noted a tendency toward sentimentalization in the book. However, I found the story to be compelling in it’s portrayal of the unthinkable choices that people must make and horrific hardships they must bear as hostages of war.

The author depicts life during the Nazi occupation of France in vivid language. She allows the reader to experience the fear and desolation  of a nation struggling for survival under the Hitler regime. But the story also celebrates the strength of the human will and the powerful love of family and country that propelled the women and men of the resistance to extraordinary acts of heroism. The book is highly engaging and well worth the read.

If you’re interested in reading more about female war heroes of the World War II era, check out my review of The Orphan’s Tale, by Pam Jenoff.