Women and World War II: The Orphan’s Tale, A Novel by Pam Jenoff

This post was published on: 03/6/21 in the Books category 0 Comments 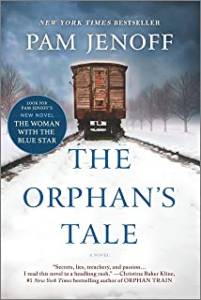 Set Amidst the Ravages and Persecution of war in WWII Germany

The Orphan’s Tale: A Novel by Pam Jenoff is a compelling story about love, loyalty, and sacrifice amidst the ravages and persecution of war in World War II Germany. Jenoff found the seeds for her story in two pieces of research from the archives of the Yad Vashem, Israel’s holocaust museum.

The first is a jarring account of the “Unknown Children.” It describes a boxcar, carrying babies seized from their parents and transported to a concentration camp. The babies weren’t even old enough to know their own names.

The second account tells of a German circus that sheltered Jews during the war. Apparently, Jewish circus dynasties had performed all over Europe for centuries, before the Germans largely annihilated them. Jenoff weaves these two disparate subjects into a heart-rending story that revolves around two strong women struggling to survive and protect the ones they love.

Noa  is a seventeen year old  Dutch woman who becomes pregnant by a Nazi soldier. Her family casts her out, and she delivers her baby in a German girls’ home operated by the Reich. Noa is blonde and blue eyed–the perfect specimen for mothering a child for the Lebensborn program. However, the baby is born with dark eyes and skin. These are obvious signs to the delivery nurse that he is not Aryan and will be unfit for adoption.

Following the birth, the nurse takes the baby from Noa and sends her away. Alone and penniless, she finds meager work at a railway station, scrubbing floors by day and sleeping in a small closet by night. One day, she rescues a tiny baby, about the age of her own. She is horrified to find him among dozens of other babies who have been left on the floor of the railway car, waiting to be transported away to the east.

She flees  from the station with the baby, and runs for hours until she collapses in the snow. The two would have frozen there, if Peter, the clown in the  Circus Neuhoff, had not rescued them. He had seen them from his winter quarters near the forest where Noa fell. Peter introduces Noa to Herr Neuhoff, the circus owner. Neuhoff offers to shelter her and the baby, who she calls Theo and claims as her brother. His one condition is that Noa will agree to train as an aerialist and perform with the circus, soon to go on tour.

Herr Neuhoff then enlists Astrid, the star aerialist and Peter’s lover, to prepare Noa for the flying trapeze. Astrid’s resentment toward Noa is immediately obvious. The trapeze, the feature act, had been hers. However, she will not refuse Herr Neuhoff’s request because she owes him dearly.

Astrid, whose original name was Ingrid, had grown up performing in a competing circus owned by her father, a Jew. Years before the war, she had left her family and the circus to marry Erik, a German soldier. Erik had been smitten with her while attending her performance on the high wire. When Hitler came to power, conditions changed, forcing Erik to divorce her.

She returned home from Berlin to find that her family had left the area and that her father had been forced to disband his circus. Despite the fact that it had become illegal to hire Jews, Herr Neuhoff took her in. Consequently, he changed her name from Ingrid to Astrid, and hired her to perform as the star aerialist.

The relationship between Astrid and Noa plays out against the backdrop of the circus family, whose existence is being threatened by economic scarcity, and against the larger canvass of the war and its cruel targeting of human beings as unfit and disposable. As the women work together to prepare for the aerial performance, they learn to love and trust one another as if their lives and the lives of those they love depend upon it. However, each knows she may be called upon to sacrifice that which is dearest to her.

POV is Sometimes Confusing but the Story is Still Engaging

At times, I found the switching back and forth in points of view between Noa and Astrid to be confusing. Furthermore, aspects of the ending scenes seemed a bit contrived. However, these small weaknesses do not detract from making the story an engaging one.

I recommend this World War II fiction to anyone who loves historical novels. Readers drawn to works like Water for Elephants by Sara Gruen and The Nightingale by by Kristen Hannah will especially like it.