The Women’s March: A History Lesson on Holding the Party in Power Accountable

20 Jan The Women’s March: A History Lesson on Holding the Party in Power Accountable

This post was published on: 01/20/17 in the Writing category 0 Comments 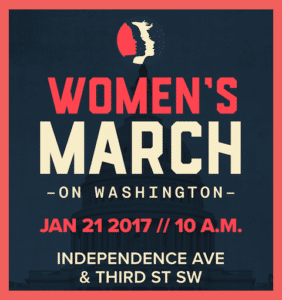 On January 21, the day following the inauguration of the forty-fifth President of the United States, over two hundred thousand people will gather in Washington, to march on behalf of women and equality. The demonstration will be composed of ethnically and culturally diverse marchers from all over the country. In solidarity, those who cannot be in Washington may attend one of the 616 Sister marches, scheduled across the nation and globe. The purpose of the event is to deliver a clear message to the new administration that Women’s rights are human rights and must not be ignored.

One hundred four years ago, a similar event occurred on March 3, 1913, the eve of the inauguration of Woodrow Wilson, the twenty-eighth president of the United States.

The Democrats had won control of the presidency for the first time in twenty-four years. They also held majorities in both houses of Congress. The Woman Suffrage Procession, as stated in the official program, was held “in a spirit of protest against the present political organization of society, from which women are excluded.”

The parade was organized by Alice Paul for the National American Woman Suffrage Association (NAWSA). It included over eight thousand marchers, four mounted brigades, twenty floats, and an allegorical performance near the Treasury building. In organization, color, and pageantry, the march became a spectacle that reputedly upstaged the inauguration itself.

Hattie and alice Stood Among the Crowd

Hattie Robinson Barton, the main character in my soon-to-be-released novel In the Fullness of Time, was there with her sister-in-law Alice Barton Rivers. As they stood among the crowd, this is what they witnessed:

A river of marchers flowed toward them in one vibrant wave of color, led by a stately woman who sat atop a white steed carrying a banner proclaiming: We demand an amendment to the Constitution of the United States enfranchising the women of the country.

Hattie had never seen a spectacle like this in all her life. It was a pageant of epic proportion, choreographed with an artist’s eye for color, texture, and detail.

Behind the banner marched the parade ushers and officers of the National American Woman Suffrage Association, followed by a regent band playing a festive tune.

After the band came a host of international delegates representing the countries where women’s suffrage had been granted. Hattie recognized the banners of Finland, New Zealand, and Australia.

Banners of countries where women had partial suffrage followed: Sweden, Denmark, Iceland, Great Britain, and Belgium. The Pioneers, representatives from states where women had gained the vote, followed the international delegation.

She wanted to join their Cause, to Be Just Like Them

“Those women made the suffrage hike from New York City. Rosalie Gardiner Jones organized it, and they have been on the road since February. They marched over two hundred and twenty-five miles.”

“Honestly, Alice, you never cease to amaze me with the people you know. Who in the world is Rosalie Gardiner Jones?”

“She’s a socialite from Oyster Bay who is a dedicated suffragist. They call her General Jones.”

Another band marched by as Hattie stood, amazed by these brave, elegant women gathered from all corners of the nation and the world, single-minded of purpose, standing up for their sisters and refusing to be intimidated or distracted from their mission.

She wanted to join their cause, to be like them—to stand with them and demonstrate the same determined grace in the face of opposition.

The women in the parade, along with a contingency of men, marched with dignity and purpose, in contrast to the levity of the onlookers, who appeared to be regarding the event as a carnival or circus.

On that day in 1913, Hattie and Alice participated in the official kickoff of a movement to gain a constitutional amendment giving women the right to vote, a movement built on the pioneer work of women like Elizabeth Cady Stanton and  Susan B. Anthony.

For seven years, these dedicated suffragists faced resistance and heartbreaking setbacks to the furtherance of their cause. Finally, on August 18, 1920, politics and public sentiment coalesced on the floor of the Tennessee legislature in favor of suffrage, providing the final ratification vote to the Nineteenth Amendment, just in time for women to vote in the 1920 presidential election.

Holding the Party in Power Accountable

One of the most effective tactics used by the suffragists under the leadership of Alice Paul, was that of holding the party in power and their leaders accountable. With the Democrats in control of both houses and a Democrat in the White House, the party could virtually pass any initiative backed by its leaders.

Paul began at the top by holding President Wilson accountable for refusing to push a federal amendment through Congress, along with the other progressive issues on his agenda for his first term. She arranged for countless delegations of women to visit him at the White House and to plead for his support in passing the suffrage amendment. When that failed, Paul initiated the practice of sustained, dramatic, nonviolent protests at the White House gates, which continued night and day, every day but Sunday, even throughout the time the nation was at war.

President Wilson held firmly to his conviction of suffrage as a state issue, which could be granted only by state legislatures. He finally lent his voice to the federal amendment when he learned that suffragists had been jailed and force fed for their refusal to discontinue their peaceful demonstrations. The president acted in time to gain passage of the amendment in the House of Representatives in 1918, but his lukewarm attempts to persuade the Senate resulted in defeat, delaying final passage until 1920 when the new Congress held a Republican majority.

Paul reasoned that the tactic of holding the party and their leaders accountable could be even more effective in congressional elections. In the states where women had been granted the vote, women could be counted on to leverage the elections by voting against candidates backed by the party in power, in this case the Democrats. The number of women eligible to vote in 1910 was around two million. If they all voted against the Democratic candidates in their states, it would make a statement to the Democratic Party that their failure to support a federal suffrage amendment would come at a price.

A Strategy that Required a Massive Grassroots Organization

By defeating or narrowing the margin of victory for even a handful of candidates in the targeted states, the effect would be more powerful than if the suffragists had targeted all anti-suffrage candidates in every state, and failed to impact election outcomes in any of them.

This strategy required massive grassroots organization in the states where women could vote, as well as recruitment of volunteers and the establishment of suffrage leagues in all of the states, in preparation for the passage of the amendment.

The Woman Suffrage Procession was only the first step in the struggle for gender equality. From 1913-1920, NAWSA and its more radical counterpart the National Woman’s Party, worked to enfranchise women through extensive grassroots organization, publicity, and coordination; through lobbying and protests in Washington; and through an active publication, The Suffragist, which became the mouthpiece of the woman’s movement.

I have every expectation that the Women’s March on Washington will be as inspiring and unifying as the march held over a century ago. It will certainly be more diverse and inclusive, as the 1913 procession consisted primarily of white, privileged women.

The march on January 21 will be a rallying point for those committed to the preservation, protection, and promotion of women’s rights, which are essentially human rights. It will also serve as a wake-up call to the new president and Congress that the proponents of human rights will not be denied. And, if the movement is to be successful, its leaders would do well to take a page from history and adopt the strategy of the suffragists in holding the party in power responsible.

A Powerful Strategy for Leveraging Change

Republicans hold a  majority in the House and Senate, and a Republican has ascended to the White House. That ensures the balance of power in the Supreme Court will shift to the right. Henceforth, any legislation passed that results in widening the gap between haves and have nots, or threaten the status and safety of the already-vulnerable and marginalized citizens of this nation, is on their heads. They must never be allowed to forget that!

The loyal opposition, represented by the participants in the Women’s March on Washington possess a powerful strategy for leveraging change in the direction of justice and inclusion for all. Hold the Party in Power accountable!

However, as demonstrated by Alice Paul and the suffragists of the prior century, the implementation of strategy demands personal commitment, hard work, and persistence that will extend far beyond the march.

I will not be in Washington on Saturday. However, I will celebrate with the loyal opposition represented there, who march in solidarity and then return to their communities to take up the rigorous work that lies ahead. It’s the work of holding ourselves and our leaders accountable for the protection and advancement of human rights and the preservation of the environment.

My hope is that this movement will inspire among us the same “greatness of soul” that Cary Chapman Catt attributed to southern suffragists like Hattie and Alice. For despite the resistance they faced, not only from white male supremacists but from many of their own gender, they never wavered in their commitment to women’s rights, which is after all, human rights.

See Responding to Our New National Reality and Why I’m Voting for Hillary.