The Writing Process: Outline or Hope and Grope?

19 Sep The Writing Process: Outline or Hope and Grope?

This post was published on: 09/19/16 in the Writing category 0 Comments

The Carolina’s Largest Festival of Books and Authors

I had the pleasure once again of attending the annual Book Marks Festival in downtown Winston Salem. Bookmarks is a non-profit organization that produces the Carolinas’ largest festival of books and authors. It also sponsors an authors-in schools-program, a series of author talks presenting best-selling and award winning writers, and a K-12 summer reading program. It is one of the many cultural opportunities available in our City of the Arts.

By next year, Bookmarks will open an independent book store in a repurposed warehouse downtown. There it will house reading spaces for readers and writers, the Bookmark’s offices, and a cafe and coffee bar. 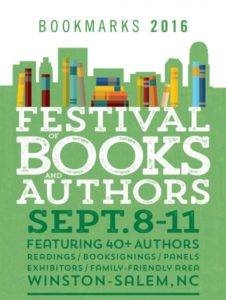 My favorite part of the festival is the opportunity to hear various acclaimed authors talk about their craft. Last year, I heard David Baldacci. I also attended a panel discussion with Pat Conroy, Ron Rice, and Cassandra King talking about the distinctive features of Southern Literature. I blogged about these sessions in  The Incomparable Pat Conroy  and Notes from David Baldacci after the 2015 festival.

I”m so glad I didn’t miss that session. Not too many months afterwards, Pat Conroy died. When I received news of his passing, I joined his giant throng of readers in mourning for one of the most popular and beloved Southern writers of the Baby Boomer generation.

This year I attended sessions with John Hart and John Grisham. The two authors are similar in that they have published best sellers in the legal thriller genre. In addition, they are both attorneys who have turned to writing as a second career.

Both are self-confident and entertaining presenters. However, as each described his writing process, it was evident that they were on opposite ends of the spectrum between the character-driven and plot-driven approach.

John Hart’s books are set in Rowan County where he grew up and started his law practice. He described his approach to writing as grope and hope. He used E.L. Doctorow’s comparison to writing being like driving in the dark through a fog bank with the headlights on. You can see only as far as the headlights carry. Buy if you’re persistent, you’ll get to your destination with only short segments of the road visible. Hart starts with a character that he allows to take him through the twists and turns of the story. He is convinced that knowing the character is the key to his success as a writer.

“If a novel is good there is a straight and true line running through it that makes sense.”

Hart used Pat Conroy’s Prince of Tides as a novel that “lacks no verisimilitude.” He contends that what makes Pat Conroy’s books so believable is the characters.

“I’ve forgotten most of the story, but I’ll never forget a character like Tom Wingo.”

Hart shared his tale of woe of how he became overconfident and tried to write his fifth novel without a clearly defined character. That, he explained,  accounts for the reason he didn’t publish anything for five years. He had decided to write a book based on the plot of The Count of Monte Cristo by Alexandre Dumas. When he was over a hundred pages in, he hit a wall. He persevered and after two hundred pages, things weren’t getting any better.

Hart’s last book, Iron House, had been published in 2011, and he had promised a new one to his publisher in 2014. He redoubled his efforts, but still felt that the work lacked quality. Finally, he made the decision to call his editor at McMillan and cancel the publication. He explained to the editor that the book simply was not representative of his best work. To his surprise and relief, the editor told him that he understood, and that McMillan would be willing to wait for his best product, rather than take something he considered mediocre.

Hart said he found his characters and was able to write Redemption Road in two years. The literary thriller was published in May 2016 and has been on the New York Times best seller list. It is also the first book in which an author has won back-to-back Edgar awards.

Grisham Begins with A Plot Outline

John Grisham, who Hart says “built and owns the legal thriller genre, along with Scott Turow,” was an equally engaging speaker. However, his process as a writer is as plot-based as Hart’s is character-based. For Grisham, every story must start with an outline, with a plan for every chapter.

One of the Big Boys

Grisham told the story of being at a book signing of his first best seller, The Firm. (A Time to Kill was Grisham’s first book. However, it remained unrecognized until it was picked up by Hollywood for a movie. At that point it became a best seller). He remembered a man picking up a copy of The Firm and commenting, “You know, the big boys turn out one of these things about once a year.”

Grisham determined that he would be one of the big boys and has published one and sometimes two books a year since 1991, when The Firm came out.

Grisham says his books take abut six months to write. He begins ruminating over a new story in the fall of every year. However, he doesn’t get down to business until the first of January, when he begins writing in earnest. He secludes himself in his office, at a computer without internet.

Prior to writing, he outlines every chapter and has a clear idea of the beginning and ending of the story. By June, Grisham has completed his manuscript and sends it to his publisher for editing. He revises in July and returns the final copy to the editor for publication.

John Grisham’s approach certainly has the advantage of allowing him to be a prolific writer. He not only continues to publish legal thrillers on a regular basis. He has also written the Theodore Boone series of thrillers. These stories about a boy who gives legal advice to his classmates, target middle school readers.

I think there’s a lot to learn from these two approaches. I tend to be more character-driven in my approach to writing. However, I’ve never been able to let go enough to allow the characters to lead me blindly from the beginning to the end of the story. Somewhere along the line, I have to get out my wall chart and map the plot points. I suppose a part of that necessity comes from the fact that I write historical fiction. Rules of that genre require that the story remain true to the historical context  in which the characters are acting.

It’s interesting to realize that two authors can approach their writing from almost opposite directions, and still produce fiction that satisfies and delights their readers.

Kudos to the Bookmarks staff for another outstanding festival, in which authors and readers can mix and mingle. I’m looking forward to the 2017 festival and the opening of the new book store. Check out the Bookmarks website at https://www.bookmarksnc.org.
SaveSave