Literary Historical Fiction: Lincoln in the Bardo by George Saunders

This post was published on: 02/21/17 in the Book Reviews, Books category 0 Comments

Original, Unique, Poetic, Ambitious in Purpose…Sometimes Over My Head

I purchased the Kindle version of  Lincoln in the Bardo. It was immediately after watching Stephen Colbert interview the author one night last week on the Late Show. When Colbert introduced George Saunders, her referred to him as “quite possibly my favorite living author.”

After reading the book, I can see why. It’s Original, unique, poetic, and ambitious in purpose and technique. But however engaging, Lincoln in the Bardo sometimes grows confusing. And frankly, in some spots, it gets a bit over my head. Nevertheless, the question the author raises in this book, as well as the hopeful answers he suggests, ultimately bring the story together for me and make the work stand out as one of a kind:

We seem to be born to love … And then all along, we sort of know that everything is conditional. So how do you, in this world, live joyfully and productively in the face of those two truths?
George Saunders

The story generates from a tragic historic event, the death of Abraham Lincoln’s son Willie, from typhoid fever. Historic accounts indicate that while Willie lay sick in his bed in February 1862, the Lincolns hosted an elaborate reception at the White House. When his mother saw that Willie’s lungs were congested, it frightened her.

Despite his son’s illness, Mr. Lincoln insisted that the party go on, after consulting Dr. Sloan, who “pronounced Willie better, and said that there was every reason for an early recovery.”

In spite of the doctor’s prognosis, Willie died on February 20. On February 24, they buried him in Oak Hill Cemetery in Georgetown. Willie’s death left the President to mourn his son, while leading a nation one-year into civil war.

We did not yet know what it was. 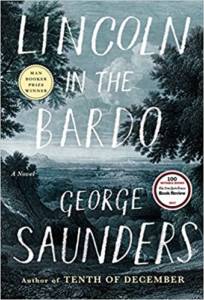 Saunders uses a series of short clips from newspapers, diaries, memoir, and historical accounts to narrate events surrounding Willie’s death. Thusly, he reveals the perspectives of various onlookers living and working in Washington and at the White House. From them we learn of the public and private gossip surrounding the first family. We understand how their every action receives judgement and commentary, beginning with the Lincoln’s reception:

Are Mr. and Mrs. Lincoln aware that there is a civil war? If they are not, Mr. and Mrs. Wade are, and for that reason decline to participate in feasting and dancing.

Costly wines and liquors flowed freely, and the immense Japanese punch bowl was filled with ten gallons of champagne.

A piggish and excessive display in a time of war.

The lavish party lingered until dawn, yet there was no joy in the evening for the mechanically smiling host and her husband. They kept climbing the steps to see how Willie was, and he was not dong well at all.”

Despite the criticism, Saunders quotes,

All the important people had come to it.

In the same manner, Saunders uses the clippings to convey public sentiment toward Lincoln. These range from criticism of his parenting, to speculations on the possible prevention of Willie’s death, to Lincoln’s personal appearance. They even address Lincoln’s handling of the war and speculate on his ability to work through his grief and provide future leadership to the country.

It’s through these clippings that the author characterizes Abraham Lincoln–the grieving father and wartime president.

At this point, Saunders introduces an other-worldly dimension to the novel. Lincoln, overcome with grief and desperate to come to terms with his son’s death, visits the crypt where they recently buried Willie. And then, Lincoln removes the body from the casket and cradles it in his arms.

There, in the Oak Hill Cemetery in Georgetown, we meet the departed Willie. He joins a cast of ghostly and weirdly  humorous residents, trapped in a bardo.

Saunders defines a bardo as a type of limbo. Departed souls lie there in a  suspended state, in a transition between this world and the next. Each one is in the process of decay, based on the circumstances of his/her death. According to the rules governing this imaginary world that Saunders has created, each resident remains there until convinced to let go of his/her former life, in order to be released to whatever existence lies beyond.

We first meet three long-time residents, central to the plot to convince Willie to move on, despite the fact that he has seen his father and is determined to “last” until he returns.

The young ones, they say, are not meant to tarry.

The first of the trio is Hans Vollman, whose death from a falling plank prevented him from consummating his marriage to a teenage woman. He now wanders with his “quite naked member swollen to the the size of Could not take my eyes off.” (Note that the deleted punctuation, incomplete thoughts that trail off, and inconsistent spelling characterize the descriptions and dialogue of the narrative in the bardo, emphasizing the otherworldly and ghostly nature of the place.)

The second resident, Roger Bevins III, regrets his suicide prompted by the rejection of a gay lover. He goes around obsessing over the sensuous nature of the world. “In telling his story, he had gained so many extra noses and hands that his body had all but vanished. “Eyes like grapes on a vine.Hands feeling the eyes. Nose smelling the hands.”

Finally, Reverend Everly Thomas serves as the moral compass for the three who guide the reader through this alternative world. Motivated by a secret later revealed, he remains in the bardo with a fixed expression on his face. “Eyebrows arched high…mouth in a perfect O of terror…and yet spoke with utmost calmness and good sense.”

In their determination to convince Willie to move on, the three engage the other residents in a plan to inhabit Lincoln’s mind and convince him to go back to the crypt, so that Willie can enter him and learn for himself what his father wants him to do.

We wished the lad to go, and thereby save himself. His father wished him to be in some bright place, free of suffering, resplendent in a new mode of being. A happy confluence of wishes.

A Host of Ghostly Characters

In the process of implementing the plan, more characters emerge. Each clamors for the chance to tell his/her story and the circumstances that bind him/her to the bardo. Each highlights the many ways that humans squander their time on earth, as they obsess and fret over the the meaningless details. Each claims the stage for a brief moment to convince the listeners of the injustice served in life. Shortly, the next unhappy spirit shoves the prior one aside, eager to tell his/her tale of woe.

None were content All had been wronged Neglected Overlooked Misunderstood…

Saunders humorously exaggerates the graveyard characters in an almost cartoonish fashion. Frugal Mrs. Blass spends her nights “gnawing at rocks and twigs, gathering these things to her, defending them zealously.”

Mr. Collier, who died face first in the dirt while worrying about his many possessions “floated horizontally like a human compass, needle facing in the direction of whichever properties he was worried about at the moment.”

The gelatinous orbs representing her daughters surrounded Mrs. Ellis who had obsessed over them in life. The orbs grew, weighted her down, and then disappeared. Then, “she would be tormented until they returned and pursued her again.”

The others include rapists, rape victims, thieves, good and bad mothers, a slave who seeks retribution from his master. For another slave who experienced some free moments,”the thought that other men enjoyed whole lifetimes comprised of such moments,” bothered him most.

They all pile into Lincoln’s mind like circus clowns crowding into a tiny car. Briefly, they learn his thoughts and sense his purpose. In the process, they become distracted from their own obsessions.

So many wills, memories, complaints, desires so much raw life-force. They thought as one simultaneously.

All the good memories of life returned as they were together.

To stay they had all been faced to fixate on the primary reason for staying to the exclusion of all else.

Some were convinced to let go and allow themselves to move on to whatever existence awaited.

Then came the familiar, yet always bone-chilling fire-sound associated with the matterlightbloom phenomenon,”heralding their departure.

Eventually, Saunders’s character of Lincoln comes to terms with his son’s death. Whether persuaded by the residents of the bardo or through his own power of reasoning, he sees in it a reflection of the suffering of others. He recognizes it as a call to resume his leadership of the country.

And therefore one must do what one could to lighten the load of those with whom one came in contact; that his current state of sorrow was not uniquely his, not at all but, but rather, its like had been felt, would yet be felt by scores of others, in all times, in every time, and must not be prolonged or exaggerated, because, in this state, he could be of no help to anyone and, given that his position in the world situated him to be either of great help or great harm, it would not do to stay low, if he could help it.

Not for the Passive Reader

This book is not for the passive reader. The layout is confusing and at times it’s difficult to determine who is speaking and under what circumstance. However, perseverance pays off. Thus, for the reader who actively pursues the story, the plot, and its meaning do not disappoint.

Finally, for more reviews of literary historical fiction, see my blogs on News of the World and Autumn.