This post was published on: 01/4/19 in the Writing category 0 Comments

In writing twentieth century historical fiction, I’ve discovered that online digital newspapers can be invaluable for finding the details needed to create an authentic setting and dialogue in my novels (See The Keowee Courier ). So many tidbits can be collected from scanning the daily news from the period in which the novel is set. Reading through each issue is like going back in a time machine. It gives me the feeling of really being there.

My first and second novels, Hattie’s Place and In the Fullness of Time, are set in rural Pickens County, South Carolina in the early 1900’s. I relied heavily on the Keowee Courier, a publication that would have been the bi-weekly newspaper for the characters in the fictional town of Calhoun, where my novels take place. I’m sure that Charles Barton, the male protagonist, must have begun each day with a cup of coffee and his copy of the Courier.

I accessed the Courier as well as several other South Carolina newspapers through the Library of Congress Chronicling America. This is a free resource offering online digital copies of local newspapers all over America. I highly recommend it for authors writing novels set in the nineteenth and twentieth centuries.

My current novel, Rising Above It, is set in 1929, at the beginning of the Great Depression. It begins in the fictional town of Calhoun, but mostly takes place about twenty miles down the road in Greenville. By subscribing to the online newspaper archive, Newspapers, I could access The Greenville News, the largest paper in the Upstate. It’s been in publication since 1874.

Here are a few of the random facts I learned about life in Greenville 1929-1930:

The Cost of Food at the Piggly Wiggly on Main Street January 1, 1930

The Cost of Other Items January 1930

Another advantage of reading The Greenville News is that it enabled me to construct my own map of the city in 1929-30. I already knew the area intimately, as I was born in Greenville, and then during my childhood, returned regularly to visit my maternal grandmother, uncle, aunt, and cousins. From 1963-1967, I attended Furman University, adding to my knowledge of the Greenville County area.

However, I needed a primary resource to document the location of the local shops, restaurants, and other business establishments of the day. All of this information I found by reading the daily articles and advertisements in The Greenville News.

From that, I was able to construct a crude map of downtown Greenville. The black ink marks the major streets and the red designates businesses and landmarks. It’s still a work in progress, but it’s a great way to concretize the setting and help me visualize where my characters lived and worked and shopped. 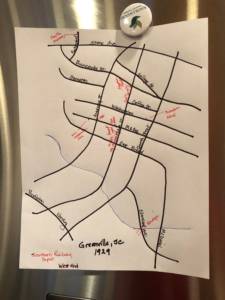 I did this in my first two novels with the town of Calhoun. However, since Calhoun is fictional, I didn’t have to worry about accuracy of street names and locations. But when writing In the Fullness of Time, in which the main characters become involved in the Woman Suffrage movement and make a trip to Washington to participate the Women’s March Around the White House, I did construct a similar map of the area around Pennsylvania Avenue, locating landmarks mentioned in the story–the White House, the U.S. Capitol, and the National Women’s Party head quarters off Lafayette Square.

Another benefit of reading the local news of the day is that it helps me create authentic dialogue for my characters, in terms of places or events they would reference, like what movie they might go to, what music they might listen to, what events they might attend. Here are some examples of what my characters might talk about–all referenced in The Greenville News:

It’s amazing how much can be learned from local newspapers of the era. I’ve given a few examples in this blog, but this is only the tip of the iceberg. In the next few blogs I’ll tell you about an important South Carolina sports competition that happened on the day the stock marked crashed in October 1929. Then, I’ll share the details of one of Greenville’s most famous murder cases that took over five years to resolve. Both events are pivotal to the plot of Rising Above It. And I learned it all from the archives of The Greenville News.