This post was published on: 05/11/18 in the Marketing and Promotion category 0 Comments

My new novel, Over the Mountain, is historical fiction set in Birmingham, Alabama, in the early sixties. I’m posting a few images of places that would have been familiar to Harriet Oechsner, the main character, to help my readers  visualize her world.

With red eyes and a swollen face, I climbed in the car with the other members of my family, and we set out behind the moving van for our new home…in Mountain Brook, a suburb of Birmingham, Alabama. 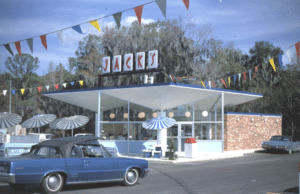 Pauline and I went running into Louisa’s room to witness (on tv) the winner of the day (of the Jack’s hamburger and milkshake contest) projectile vomit his milkshake all over himself and the camera, being hustled off to get cleaned up. And then the camera dropped to focus on the floor and you could see a hand wiping the lens with a rag to clean off the vomit and hear the voices of the children in the background complaining about the smell. Finally they cut to commercial but were wise enough not to use the one with the Jack’s Jingle.

The pledge envelope sat there between us like a soiled envelope that nobody wanted to touch. Finally Donna picked it up by the corner and slipped it back in her purse.

Lulu’s artwork was displayed at the downtown public library, and our whole family drove over the mountain the next evening to see it.

I’ll show you some sights in Birmingham that I bet you never saw before, said Halston. I might even take you up to Vulcan and tell you how I got up there close enough to paint my initials on his ass.

I got the sport coats, laid them across the backseat of the VW, and then headed out to Eastwood Mall to meet Josie. We wandered around …for an hour or so, testing out the perfume at Pizitz’s cosmetic counter and stopping by J.C. Penney so I could pick up a pair of panty hose.

On the Saturday I was scheduled to take the SAT at Ramsay High School, I was still stopped up from the sinus infection…I stuffed a wad of Kleenex in my madras purse along with my No. 2 pencils and my admission ticket to the test.

After a forty-five minute ride, the buses would arrive at Camp Cosby, a site nestled in 650 acres of woods surrounding a twenty-eight-acre lake and located about eighteen miles from Birmingham, north of Trussville…I taught the red-capped Guppies, who were the beginners, and focused mainly on getting them to put their faces in the water and to learn a basic flutter kick and arm stroke.

On April 3, the same day sit-ins began at the lunch counters in downtown Birmingham, the local premiere of To Kill a Mockingbird aired at the Melba Theater next to Woolworth’s…We’d read the book and were dying to see how the movie would portray Harper Lee’s memorable characters, two of them played by local celebrities. Mary Badham, who was cast in the role of Scout, attended Brooke Hill, a private girls’ school in Mountain Brook, with a number of my friends from church. And Phillip Alford, who played Jem, worked out in a dance studio in Crestline where I took ballet lessons.

At two forty, all the gathered marchers walked down the aisle toward the exit, led by Martin Luther King, Ralph Abernathy, and Fred Shuttlesworth…”

I was named after W.E.B Du Bois, the first Negro to earn a PhD at Harvard. I’m gonna get my PhD too.” And then he added, “I jes’ got out of jail.”
We all gasped, and I could tell Douggie was spellbound.
“What did you do to get put in jai?”
“Nothing,” he said resolutely. “Nothing but march for freedom.” 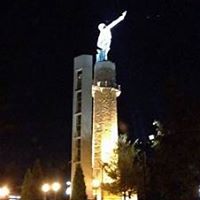 …We had an hour or so left before my curfew, and Tony drove us up to Vulcan Park…where we sat on a wall to take in the dazzling view below. Tony put his arm around me and drew me close… I reached for his hand and looked up at him, so caught up in the intensity of my feelings …I was ready to weep.”

If you haven’t had a chance to read Over the Mountain, you can get a copy on kindle for the reduced price of $2.99, for a limited time only. Just click the link below to purchase.
https://amzn.to/2wv45WE