Wilmington’s Lie: Confronting our Skeletons in the Closet

18 Jul Wilmington’s Lie: Confronting our Skeletons in the Closet 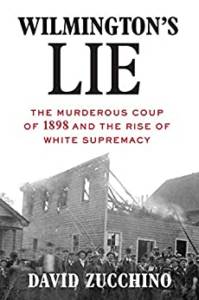 It was 1898, a tumultuous mid term election year. White planters and business leaders had vowed to remove the city’s multiracial government and black public officials by the ballot or the bullet–or both. Few white men intended to navigate election week that November without a firearm in easy reach.

In Wilmington’s Lie: The Murderous Coup of 1898 and the Rise of White Supremacy, Pulitzer Prize journalist David Zucchino confronts an ugly skeleton in North Carolina’s closet that’s been dodged and falsely justified by the white community for over one hundred years. Through meticulous research and extensive interviews with descendants of the perpetrators and victims of the violence, Zucchino names the characters and lays out the plot to re-establish white supremacy in excruciating detail.

On the eve of the 1898 election, Wilmington’s politics was controlled by an elected integrated Fusionist government. The Populist and Republican parties had formed a coalition and ousted the Democrats from power in 1894, for the first time since Reconstruction. The Fusionists had swept every statewide office including the governorship, won by Daniel L. Russell.

Wilmington, the largest city in North Carolina at that time, had a majority-black population of 55 percent of its roughly 25,000 people. Blacks were elected to local office, serving as aldermen, justice of the peace, coroner, mail clerks and mail carriers.

Blacks also held significant economic power in the community as skilled craftsmen, shop owners, mechanics, restauranteurs, butchers, and tailors. Black men held some of the most prominent business and leadership roles in the city–men such as architect and financier Frederick Sadgwar, real estate agent and auctioneer Thomas C. Miller, and collector of customs at the Port of Wilmington, John C. Dancy.

Alexander Manly and his brother Frank, owned and edited the Wilmington Daily Record, one of the few black newspapers in the state and reportedly the only black daily newspaper in the country. When Alex Manly confronted the white power establishment with an editorial challenging the notion of predatory black men debauching white women, it was reprinted across the South with headlines such as “White Women Slandered.” Manly would become a target in the white-supremacy campaign soon to be launched by Josephus Daniels’s Raleigh newspaper.

The 1898 election was fast approaching. Democrats, desperate to avoid another loss, hatched a plot to reassert white rule in Wilmington. The plan depended on three types of participants: (1) Men who could write (2)Men who could speak and (3) Men who could ride.

Men Who Could Write

Josephus Daniels, the editor and publisher of The News and Observer, became the militant voice of the movement. He and Furnifold Simmons, State Democratic Party Chairman, met in New Bern in March of 1898 to discuss the “Negro problem”–how to end Negro rule and restore the Democrats to power. Through articles in the News and Observer that were reprinted across North Carolina and the region, Daniels unabashedly launched an aggressive state wide white-supremacy campaign.

Men Who Could Speak

The chief spokesman and orator for Democrats in the city was Alfred Moore Waddell, former officer in the Confederate army and local attorney. On October 24, 1898, Moore roused a crowd of over 1,000 white men and women at Wilmington’s Opera House, extolling the virtue of white supremacy and swearing that rather than succumb to the current rule of black men, he would rather “choke the Cape Fear with carcasses.”

Men Who Could Ride

The Democratic Party was well-prepared to embrace force as a tactic through the loyalty of several armed groups. The Red Shirts, a white paramilitary entity reminiscent of the Ku Klux Klan, rode together in bands to disrupt Republican rallies and discourage and suppress black voting at the polls.

The Wilmington Light Infantry militia, composed of 100 well-drilled soldiers freshly returned from the Spanish American War–served the  interests of Wilmington’s white supremists rather than the governor. They raised $1200 for a Colt rapid-fire gun for the unit  because they lacked the firepower to properly intimidate and control the black majority of the city.

The Naval Reserves, composed of upper, middle class and working class men from families active in white supremacy campaigns, were supplied with a Hotchkiss gun that could fire eighty to one hundred rounds a minute.

On Election Day, November 8, Democrats stuffed ballot boxes, intimidated black residents with force, and prevented them from voting. New Hanover County flipped from a 960-vote Fusionist majority in 1896 to a 500-vote Democratic margin in 1898. In one precinct, a Democratic candidate received 113 more votes than the total number of registered voters. Democrats now controlled the state and the county.

With the election decided in favor of the Democrats, the purge began. On November 10, Alfred Waddell, accompanied by his select colleagues known as the Committee of Twenty-Five, led a mob through the streets of Wilmington with the intent of lynching the editor of the Record for not responding to a “White Declaration of Independence” that demanded Manly to acknowledge white rule and leave town. Manly had escaped the day before, and the mob satisfied itself by torching the building.

On the same day, the Committee of Twenty-Five forced the Fusionist mayor, the police chief, and the board of alderman to resign. Afterwards, they installed Waddell as mayor.

Men with rifles and shotguns, supported by the Light Infantry militia, fired on a crowd gathered in the black Wilmington neighborhood known as Brooklyn, under the pretense that armed black men were planning an insurrection. Many were shot in the back. Over sixty people died. There were no indictments.

Hundreds of terrified black families fled their homes and took refuge in the cemeteries and swamps outside of town. It would be weeks before they returned. More than 2,000 black residents moved out permanently. The city’s black population plunged from 56 percent in 1898 to 40 percent in 1930. Currently, it stands at about 18 percent.

After the massacre, Democrats drove white and black Republican leaders out of town, escorting some by train to locations far from the South, and threatening to kill them if they ever returned to Wilmington.

The coup “transformed Wilmington from an American mecca for blacks to a bastion of white supremacy virulently hostile to its black citizens.” For decades, the massacre was justified as a white law-and-order response to an unfortunate event where blacks were planning a race riot to overthrow whites.

Leaders of the violence went on to celebrated political careers. Josephus Daniels was appointed secretary of the navy under Woodrow Wilson and was later named ambassador to Mexico by Franklin Roosevelt. Furnifold Simmons served thirty years as a United States senator. None were held responsible for the brutal murders.

There is currently a movement by thoughtful citizens on both sides of history to face up to America’s  racist past, acknowledge the systemic injustices to people of color based upon that past, and take actions to right those injustices. Zucchino’s book serves as a cautionary tale for beginning the process of confronting the skeletons in our closet and refusing to allow them to determine our future.

In addition to the book, I found two resources helpful in writing this article:

How a Mob Turned a Diverse City into a White-supremist Bastion by Louis P. Masur