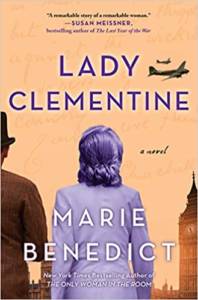 Woman Behind the Scenes

This is a novel that explores many of the familiar historical events surrounding the career of Winston Churchill, narrated by his wife, Lady Clementine Hozier Churchill.

Through her eyes, we experience Churchill’s rise to First Lord of the Admiralty, his demotion after his handling of the disastrous Gallipoli Campaign, his return to power as Prime Minister, his leadership of Britain through the darkest days of war after the fall of France, and his diplomatic relations with FDR and Stalin.

From the day of their marriage at St. Margaret’s, Westminster, in 1908, Lady Clementine becomes a partner, confident, and counselor to her husband. Through two world wars, she remains a steady force behind-the-scenes, as well as a visible presence by his side, accompanying him to meetings and events where she is often the only woman in the room.

Her belief in her husband’s unique ability to lead the country through war, and her determination to actively support his work, often collide with her desire to be a good mother and to maintain a stable home for her children. The conflicting pressures lead to a breakdown in her health, which necessitates periods of complete rest away from the demands of her husband and her domestic duties.

Despite her personal battles, she becomes a beacon of hope to the war-weary citizens of London as she stands in solidarity with them through visits to the bomb shelters and campaigns to provide relief to those bombed out of their homes.

For more novels about strong women who rise above the gender norms in their era, see Kathy’s Book List for Novels on Women in World War II.