This post was published on: 09/5/18 in the Books category 0 Comments

Bookmarks Festival of Books and Authors

Over the past two weeks, I’ve been reading some of the books whose authors are scheduled to present at the Bookmarks Festival of Books and Authors, September 6-9.  To make plenty of time for reading, I’m not writing my own reviews of the books as I usually do. Instead, I’m including links to professional reviews along with my comments about them.

I’ll also comment on the sessions I’m interested in attending. And, if you want to consider attending some of the events too, there’s a downloadable Bookmarks Festival program you can check out. 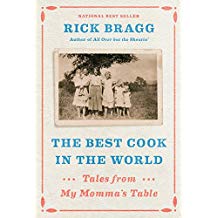 This is a delightful book that is as much about blue-collar Southern culture as it is about cooking. As Rick Brag collects and records his mama’s recipes, he also weaves tales about how the best cooks in the family taught them to her.

It all began in 1924, when Rick’s grandfather, Charlie Bundrum, mounted his mule and went in search of his father, Jimmy Jim Bundrum. After killing another man in a drunken knife fight in 1919, Jimmy Jim fled into the North Georgia mountains, leaving behind his sickly wife and family.

Despite the fact that his father was an outlaw and a rounder, Charlie knew Jimmy Jim Bundrum was the best cook in that part of the country. It was for that reason alone he pursued his father. When he found him, the old man spoke first.

Jimmy Jim taught Rick’s grandmother Ava to cook, and Ava taught Rick’s mama, who also learned from some of the other fine cooks in the family. With each added recipe, Bragg serves up the piece of family lore attached to it.

The book will appeal to anyone who loves simple, comfort food and enjoys a good story. Read more about the book in Kirkus Review.

Our Prince of Scribes

I’m definitely attending the session led by Rick Bragg and Mark Powell  entitled Our Prince of Scribes: Remembering Pat Conroy. I’ve written previously on Pat Conroy. He was one of my favorite authors. I was fortunate enough to attend his presentation at the Bookmarks Festival in 2015.

This is a compelling book, where the main character confronts his prejudice toward his gay brother and changes his attitude. It takes place in Tennessee and Florida, two areas of the country often thought to hold reactionary views on issues related to gender equality. The author says,

I thought that a story like this needed to be told in the South for that reason, because I think the South is a microcosm of America, and because so many people have misconceptions about the South.

You can find out more about the book in this Kirkus Book Review.

Setting Out to Journey

I’m planning to attend the Bookmarks session entitled Setting Out to Journey, which will be conducted by Silas House, Ingrid Rojas Contreras, and Hahna Reiko Rizzuto.

What We Lose by Zinzi Clemmons

This is an intriguing novel about the death and loss of a mother, written from the perspective of her daughter. It also takes on the ambitious task of exploring the issues of race, class, and gender and the legacy of apartheid. the Guardian describes it aptly as “a debut of haunting fragments.” You can read more in the Guardian Book Review.

I’m glad I read the book for its poignant portrayal of how it feels to lose someone as close as a mother. The author is a gifted writer, who has the ability to share her feelings without censoring or sugar coating. Though this honestly makes me feel uncomfortable at times, it compels me to confront my own feelings about death and loss that I would rather let lie.

Zinzi Clemmons will be giving the keynote presentation at Hanes Auditorium, Salem College, on Thursday, September 6, at 7:30 p.m. I’m hoping to be able to get over there to hear her. 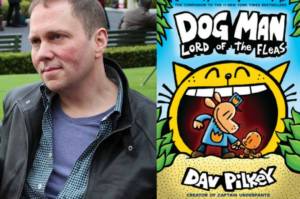 For the first time, Bookmarks is hosting a kids’ author as the keynote speaker on Friday night. I got my tickets early to this sold-out event. Although I haven’t read his books, my grandson Andy is a big fan of Dav Pilkey and his Captain Underpants series. I can’t wait to see how he likes it.

If you love books and are in the vicinity of Winston-Salem on Saturday, September 8, you don’t want to miss all the festival activities going on downtown between Second and Fourth Street. Even if you’re planning to watch the Deacs play at 12:00, you’ll have time to take in one or two events in the morning and still get there for the kickoff.

I hope to see you there!